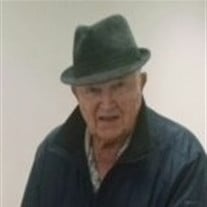 Park Raymond Lipp Jr passed away on the evening of Sunday, May 9, 2021. Park was born on June 29, 1929 to Park Lipp Sr and Mary (Bush) Lipp in New Springfield, Ohio, the fifth of six children. After graduating from Springfield Township High School, Park followed his brothers into the U.S Armed Forces in 1947. While Park did not see active duty, he was proud of the work he accomplished as a weatherman stationed in Saudi Arabia, where he also represented the Air Force as a competitive diver. After leaving the Air Force, Park pursued his undergraduate and graduate degrees and began his lifelong career in education. In addition to his work as a teacher and principal at New Springfield High School, Park served as principal of Finland Middle School in the Southwestern City School district and later as an educational consultant for the Ohio Department of Education. Park met his wife Jean on a blind date when they were both in college. After a long-distance courtship, they married on May 30th, 1953. Park and Jean eventually settled in Grove City, Ohio, where they raised their four children. Park was an active member in the community, including his role in the Grove City Lion's Club and his membership at St. John's Evangelical Lutheran Church. Never one to sit still, after retirement Park remained active as a school bus driver, maintaining a large vegetable garden, and swimming with his pals daily at the YMCA. Park made many memories during his fishing trips in Canada and while playing weekly rounds of golf with friends. Park was preceded in death by his loving wife of 61 years, Irma Jean Lipp, and his son Park R. Lipp, III. He is survived by his children, Charles Lipp, Allen (Jill) Lipp, and Mindy (Jeff) McDaniel; and daughter in law, Deborah Lipp; grandchildren, Tiffany (Billy) Perry, Jacqueline (Michael) Lipp, Park R. Lipp, IV, Virginia (Brandon) Rogers, Thomas (Lindsay) Lipp, Emily Lipp, Nathan McDaniel, Madelynn McDaniel; and five great-grandchildren. Park also leaves behind to cherish his memory, his loving companion Cindy Eddy, who stayed by his side throughout his illness providing comfort, care and smiles. Park's family will receive friends 5-7 PM Friday, May 14, 2021 at Schoedinger Grove City, 3920 Broadway. Funeral Service will be held 10 AM Saturday at St. John's Lutheran Church, 3220 Columbus St., Grove City. Pastor Patti Morlock officiating. Interment to follow at Grove City Cemetery West with military honors. Memorial contributions in Park's memory may be made to the Alzheimer's Association. Visit www.schoedinger.com to share a special memory or watch his tribute video.

Park Raymond Lipp Jr passed away on the evening of Sunday, May 9, 2021. Park was born on June 29, 1929 to Park Lipp Sr and Mary (Bush) Lipp in New Springfield, Ohio, the fifth of six children. After graduating from Springfield Township High... View Obituary & Service Information

The family of Park Raymond Lipp, Jr. created this Life Tributes page to make it easy to share your memories.

Park Raymond Lipp Jr passed away on the evening of Sunday, May...

Send flowers to the Lipp family.