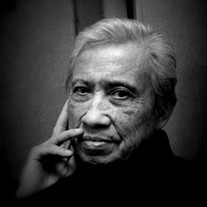 Panfilo Sales Reyes passed away on Sunday, January 9, 2022, at the age of 92. He was born in Lipa, Philippines, on May 21, 1929. The eldest of nine children, he strived to set the best examples for them. Panfilo attended Mapua Institute of Technology and graduated with a Bachelor of Science in Architecture. After graduation, he worked as an architect in the Philippines. In 1970, he emigrated to the United States to pursue the American dream with his wife, Azucena "Ceny", and together they had one son, Anthony Reyes. Panfilo had a successful 25-year career with American Electric Power as a structural engineer. He was known to many as an excellent dancer and never shied away from showing off his moves on a dance floor. In his free time, he also enjoyed gardening, woodworking, reading and writing. He wrote a book about his family's history and growing up in the Philippines titled The House of Destiny. Throughout his life, and especially after his retirement, he and Ceny enjoyed traveling together; they saw many countries while on cruises or group trips. Faith was always central to his life. He was a parishioner at St. Matthew's where he also volunteered and became a member of the Knights of Columbus. In addition to his parents, Rosario and Pedro, he was preceded in death by his brothers Isidro and Mamerto. He is survived by his loving wife of 54 years, Ceny Reyes; his son, Anthony (Ashley) Reyes, and their daughter, Harper. A Mass of Christian Burial will be held on Saturday, January 15, 2022, at 10am at St. Matthew the Apostle Catholic Church, Fr. Theodore Sill to officiate. A livestream will be held at https://www.youtube.com/StMatthewtheApostleCatholicParishGahanna for those unable to attend. Cremation arrangements are entrusted to SCHOEDINGER NORTHEAST FUNERAL HOME.

Panfilo Sales Reyes passed away on Sunday, January 9, 2022, at the age of 92. He was born in Lipa, Philippines, on May 21, 1929. The eldest of nine children, he strived to set the best examples for them. Panfilo attended Mapua Institute of Technology... View Obituary & Service Information

The family of Panfilo Reyes created this Life Tributes page to make it easy to share your memories.

Send flowers to the Reyes family.