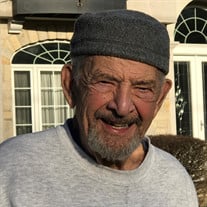 In memory of Nicholas J. Teteris, MD, loving father and grandfather, dedicated physician and patriotic veteran. Born in Martins Ferry, Ohio to Greek immigrants. He attended Linsly Military Institute where he graduated as valedictorian. He went on to receive his undergraduate degree from Washington and Jefferson College. From there, he pursued a medical degree at The Ohio State University. His medical education was interrupted by the Korean War, during which time he served in the United States Air Force as a flight surgeon with the 38th Bombardier Wing before coming back to Columbus to complete a residency in Obstetrics and Gynecology. He subsequently joined the Department of OB/GYN at OSU where he was deeply committed to patient care and medical education. He practiced in this context until the mid 1990's when he took over the position of Medical Director of the Operating Rooms at Ohio State. He held the position until his retirement in his mid 70's. He will be deeply missed by his son John, (daughter in law Laura), daughter Georgia, grandchildren Nick, Olivia, Jack, Tatum and Cash, longtime devoted companion Pamela Shaver, former spouse Jean Teteris, sister Dorothy Leos, nephew Jimmy John Leos and many friends and colleagues. Family will receive friends from 4-7 P.M. Friday, September 11, 2020 at SCHOEDINGER NORTHWEST CHAPEL, 1740 Zollinger Rd. Guests are respectfully required to wear masks and attendance will be monitored to ensure safety for everyone attending. In lieu of flowers, memorial contributions may be made to the Wounded Warriors Project, P.O. Box 758516, Topeka, Kansas 66675-8516. To share memories or condolences, please visit www.schoedinger.com.

The family of Nicholas John Teteris, MD created this Life Tributes page to make it easy to share your memories.

Send flowers to the Teteris family.