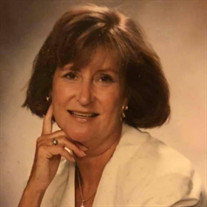 Nancy Lemley Hack Hagens, age 89, passed away peacefully at Riverside Hospital in Columbus, on Sunday, January 2, 2022, with her devoted son Scott by her side. She was born on July 15, 1932, in Fayette, Ohio, to the late Lewis and Louella (Gottschalk) Lemley. She was a resident of Friendship Village of Dublin. Nancy was a graduate of Grandview High School (Columbus), married her husband Richard Hack in 1952, and raised her family in Upper Arlington and New Bremen, Ohio. In 1977 she married her husband Richard Hagens, and together while living in Upper Arlington, they built a business, and then a home on Lake Erie, Marblehead, Ohio, where her family had spent a lifetime of summer vacations in Port Clinton, and near Lakeside, where she went to camp as a child. Richard Hagens passed away in 1990 and Nancy stayed in their home on Gravel Bar Harbor for 25 years, returning to a new career, as Ottawa County Regional Director for Easter Seals and the Salvation Army. In earlier decades, she worked as a Legal Secretary, and as an active and devoted homemaker and mother to her sons William (Bill) and Scott Hack. In retirement, she continued to volunteer with Salvation Army of Ottawa County, along with her partner and companion, Phil Treuhaft (Port Clinton) who precedes her. Throughout her life, she was a member of Trinity Methodist Church of Columbus, St. Paul United Church of Christ of New Bremen, Lakeside United Methodist Church, First Community Church of Columbus, and was a founding member of the New Bremen Historical Society. She enjoyed volunteering at Lakeside Methodist, volunteered at Otterbein Nursing Home of Lakeside, teaching Reality Classes with the residents. Together with her friends, her sons, and her partner, Phil, she enjoyed traveling the world, fulfilling a lifelong dream of travel. Nancy was a devoted friend to everyone, and kept in touch with friends, cousins, Aunts and Uncles, all of her life. She was the life of the party, vivacious, optimistic, fashionable, with an infectious laugh, great sense of humor, and a love of nature and beauty which she instilled in her sons. She loved the theater, performances, sports, Ohio State Football, music and movies. She could remember and sing the music from any show one could think of. She will be greatly missed by her sons, Scott, of Columbus, William (Wibowo) of San Francisco, and devoted niece Jayne (Mike) Kaylor, of Upper Arlington, many nieces and nephews and great nieces and nephews, the Hagens family, Gretchen Treuhaft Schmidt and the Fleming children. She is preceded in death by her brother, Lewis Lemley, of Dublin, Ohio, with whom she was very close their entire lives. Memorial services in Columbus will be planned for Spring 2022. Memorial contributions can be made to Lakeside United Methodist Church, 450 Central Ave., Lakeside, Ohio, 43440. To leave memories or condolences, visit www.Schoedinger.com and also GilbergHartwigfh.com. Arrangements entrusted to SCHOEDINGER NORTHWEST.

Nancy Lemley Hack Hagens, age 89, passed away peacefully at Riverside Hospital in Columbus, on Sunday, January 2, 2022, with her devoted son Scott by her side. She was born on July 15, 1932, in Fayette, Ohio, to the late Lewis and Louella (Gottschalk)... View Obituary & Service Information

The family of Nancy Lemley Hack Hagens created this Life Tributes page to make it easy to share your memories.

Send flowers to the Hagens family.