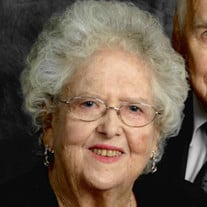 Myrna Ann Foley (Graham) died on Saturday, October 23, at 6:30 a.m. She had been surrounded by loving family in her last days, and they are comforted that she is now at peace and free of pain. Myrna was born on January 25, 1935 in Pennsville, Ohio, to Dwight and Pearl Graham. She spent her childhood there and graduated from Pennsville High School before moving to the big city of Columbus to study nursing at the Grant Nursing School. After she became an RN, she married Charles P. Foley, who survives her, and remained married to him for 65 years. Together they had a happy and fulfilling life among family and friends in Columbus, New Albany, and Gahanna. Myrna is survived by her three children: Patrick (Michelle) Foley, Tim Foley and Pat Brown, and Julie Ferguson. She is also survived by the grandchildren she loved so much and treated so well: Mellisa Foley, Daniel (Caitlyn) Ferguson, Andrew (Cheyenne and Harper) Ferguson, and Brandon Foley. Surviving brothers are Don (Sheila) Graham and Dick (Linda) Graham. She is also survived by in-laws Mary (Jim) Hunt, Connie Graham, Kay Graham, Mary Graham, Patty Mills, and Anita Foley. Numerous nieces and nephews will miss hearing her sing "Happy Birthday" as only Aunt Myrna could do. Myrna was preceded in death by her parents, Dwight and Pearl Graham, brothers Bob Graham, Dana Graham, and Dale Graham. Also preceding her were brothers-in-law Clarence Mills and Jim Foley, and son-in-law David Ferguson. Myrna had a happy and fulfilling life filled with friends from all walks of life. She loved her work and church friends and had almost life-long friends from her women's club Century CCL. She and Chuck were snowbirds, and they loved their group of friends in Florida. She was a faithful member of New Albany United Methodist Church and enjoyed going to services, bible study, women's groups, and church activities. Myrna loved traveling, reading, and playing games - from card games to board games- and instilled this love in all of her children and grandchildren. Our family would particularly like to thank the employees of Wesley Woods, where she resided in her final days, and Wesley Hospice, who all showed so much compassion and care while she was with them. If you would like to make a donation in lieu of flowers, please donate to Wesley Hospice, 4588 Wesley Woods Blvd, Ste 2A, New Albany, Ohio 43054. Calling hours will be held Thursday, October 28 from 3-7 at SCHOEDINGER NORTHEAST FUNERAL HOME, 1051 Johnstown Road, Gahanna, Ohio. We respectfully ask that masks be worn in the funeral home. A memorial service will be held at a later date.

Myrna Ann Foley (Graham) died on Saturday, October 23, at 6:30 a.m. She had been surrounded by loving family in her last days, and they are comforted that she is now at peace and free of pain. Myrna was born on January 25, 1935 in Pennsville,... View Obituary & Service Information

The family of Myrna Foley created this Life Tributes page to make it easy to share your memories.

Send flowers to the Foley family.