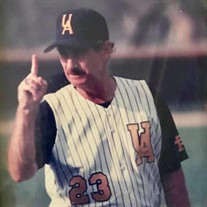 Michael Andrew Matthaes, 78, passed away Friday, February 5, 2021 at Riverside Methodist Hospital in Columbus, Ohio, after a hard-fought battle with cancer and heart disease. He was born March 30, 1942 at White Cross Hospital in Columbus, Ohio. Mike graduated from North High School Class of 1960, and married his high school sweetheart, Lynne June Purslow, on August 18, 1962, in Columbus, Ohio. He graduated from The Ohio State University Class of 1964 with a Bachelor of Science in Education. He began his teaching career at Brookpark Jr. High in Grove City, then taught Life Science at Hastings Middle School in Upper Arlington and finished his career teaching Biology at Upper Arlington High School, from which he retired in 1997. He coached baseball and basketball at Brookpark, and baseball and football at Hastings. He was the Varsity Baseball coach at Upper Arlington from 1988-1996, where they were the Ohio High School Baseball State Championship Runners Up in 1989, and State Champions in 1990. He was inducted into the Ohio High School Athletic Association Central District Hall of Fame in 2003, and the Upper Arlington Baseball Hall of Fame in 2015. He was a member of Peachblow United Methodist Church. He enjoyed spending time with his wife of 58 years and their 4 children and their families. He loved watching his grandchildren play sports, Ohio State Football, golf, travel, bird watching, milkshakes, mowing, and relaxing in his blue chair. He looked forward to his annual golf trips with his lifelong buddies Bill and Bob Beelman, and Tom Pollock. Mike was very outgoing and could talk to anyone. He was a talented handyman and painter. He was one of the founding parents of Clintonville Academy. Survived by his wife of 58 years Lynne J. Purslow Matthaes, son Jeff (Deb) Matthaes, daughters Michelle (Wayne) Woo, Renee (Bob) Nelson, and Heather (Ectore) Tranquillo, grandchildren Megan & Jacob (Sarah Molitor) Nelson; Matthew Matthaes; Brandon, Zach & Brynn Woo; and Olivia, Sophie & Isabelle Tranquillo. Preceded in death by parents Jack & Jean Matthaes, and sister Sue Ann (Louis) Lindeman. Private service Monday February 8, 2021 at Schoedinger Worthington Chapel. Private burial Tuesday February 9, 2021 at Union Cemetery. In lieu of flowers, memorial donations may be made to the American Heart Association in his memory. https://www.heart.org/?form=FUNSFCXVSPR&s_src=21H2W1AEMG&s_subsrc=feb21_global_desktop&utm_source=heart.org&utm_medium=website&utm_campaign=fy21_feb&utm_content=feb21_global_desktop%20

The family of Michael Matthaes created this Life Tributes page to make it easy to share your memories.

Send flowers to the Matthaes family.