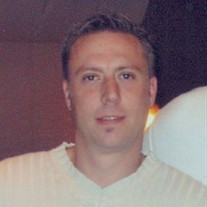 On Saturday, November 21, 2020, Michael Paul Jucha, loving son and father, passed away suddenly at age 46 as a result of complications from COVID and pneumonia. Michael was born on November 16, 1974 in Pittsburgh, Pennsylvania to Lennah Thompson and Paul Jucha. He was an active child and developed a love for extreme sports and hobbies from an early age. He loved bicycles and raced BMX in his youth. One of the best moments in his life was winning the #1 state plate in BMX racing in 1995 in the fastest class. That passion grew with him and transformed into a love for motocross, motorcycles and all things fast. He took pride in testing the limits of his physical abilities from skiing and jumping snowcapped hills, flipping a motocross bike over dirt covered tracks, or racing 'knee-down' at top speeds along winding roads on his sports bike. After several injuries limited his ability to participate in the sports he loved, he adapted his need for speed into radio-controlled cars. He built his business, Precision Hobbies, from the ground up based on his love and knowledge of RC cars and quickly became a notable and respected member of the RC Community country wide. Most of his free time in the last ten years was spent cycling. He regularly participated in group rides and national cycling competitions. He was an avid cyclist, often riding 100 miles a day. Michael never did anything halfway. When he wanted something, he was driven to act until he had it and he always gave 100. He threw himself into his hobbies, gaining as much knowledge and experience as he could, as quickly as he could. One of Michael's biggest sources of pride has always been his children. Lexi Rodocker, 25, his eldest daughter's fondest memory with her Dad was a hiking trip they took to Creekside Park where they waded in the water, climbed trees, and fed ducks. She always enjoyed visiting her Dad and sharing side splitting laughs. Lily Jucha, 7, Michael's youngest daughter is a mini version of her Dad. She is most proud that she learned to ride her bike without training wheels because she knew how proud her Dad would be. Since learning to ride, she has already also learned to wheelie and 'hop'. Kasey Burns, 14, Michael's step-son has always been the testosterone addition he needed surrounded by all those girls. He enjoyed racing RC cars with him and designing and painting RC car bodies. Michael was a patient and thorough teacher with him. Michael is Lennah Thompson's first born and only son. Their bond never stopped growing, and Michael had more love, respect, and appreciation for her than can be quantified. Throughout his life she was his biggest fan and number one supporter. In the last year of his life, Michael rekindled a childhood romance with his longtime friend, Jennifer Keller. Though their time together was short, their love was strong and their bond was true. Michael will be missed by so many within the various communities and groups he was a part of. The Diabetes support groups, the cycling groups, the RC groups. Michael was active and involved and was loved and respected. He is survived by his parents, Lennah Thompson and Paul Jucha; his sister Beth Zeches and her family, his daughters Alexis and Lily, his step-son Kasey, his grandson Liam and several extended family members including nieces and cousins. Services have been entrusted to SCHOEDINGER NORTHEAST FUNERAL HOME. Private services are being held in accordance with the families wishes and a celebration of life will be held at a later date. Flowers are welcome, as are donations to the Central Ohio Diabetes Association.

On Saturday, November 21, 2020, Michael Paul Jucha, loving son and father, passed away suddenly at age 46 as a result of complications from COVID and pneumonia. Michael was born on November 16, 1974 in Pittsburgh, Pennsylvania to Lennah Thompson... View Obituary & Service Information

The family of Michael Jucha created this Life Tributes page to make it easy to share your memories.

Send flowers to the Jucha family.