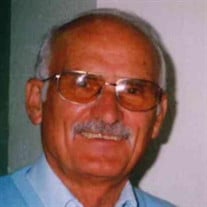 Michael Gorcoff, age 93, of Columbus, Ohio passed away on September 17, 2020. Michael was born in Johnstown, PA to Peter and Helen (Stoyanoff) Gorcoff. Michael grew up in the Johnstown area and later moved to Akron and then Columbus in 1968. Michael was honorably discharged from the US Army after service in WWII. On February 14, 1958 he married his Valentine Day bride, Marion, who passed in 2015 after 57 years of marriage. Along with his wife, Michael is predeceased by his parents and siblings: brothers, Van Gorcoff and Max Gorcoff, and sister: Christine (Gorcoff) Bernard. Michael is survived by his son Gary Gorcoff, daughter-in-law Sandy Gorcoff, and grandchildren Bryan Gorcoff and Katrina Gorcoff. He is also survived by several nieces and nephews, and also leaves behind special people who receive a shoutout from the family: Michael “Big M” Johnson and Tom Gorcoff. Michael was very unselfish with his time, after a long day of work at Budweiser Brewery, from where he would eventually retire, he would interact with Gary and his friends, playing backyard football. Later, he would spend similar time attending Bryan’s baseball or hockey games and Katrina’s softball games. Michael would rarely miss an event. Michael loved taking walks with Marion, especially in Florida at their vacation spots. He loved baseball and Penn State football. He loved all foods, including spicy stuffed peppers, grape leaves, piperki (peppers in vinegar and oil), and most recently found the love for chicken fried rice. Impressively, Michael took up running at the age of 50 and won several races in his age group. He was also known as “5:40” for his amazing running time. Just as impressive as his time, he took this passion for running to 12 marathons, including 3 Boston Marathons. Though he was passionate about running, his greatest passion will always be his wife, Marion. Michael’s family will receive friends on Thursday, September 24, 2020 from 6pm-8pm at Schoedinger Funeral and Cremation Service, 6699 N. High Street, Worthington, Ohio. All guests are asked to wear masks.

Michael Gorcoff, age 93, of Columbus, Ohio passed away on September 17, 2020. Michael was born in Johnstown, PA to Peter and Helen (Stoyanoff) Gorcoff. Michael grew up in the Johnstown area and later moved to Akron and then Columbus in 1968.... View Obituary & Service Information

The family of Michael Gorcoff created this Life Tributes page to make it easy to share your memories.

Michael Gorcoff, age 93, of Columbus, Ohio passed away on September...

Send flowers to the Gorcoff family.