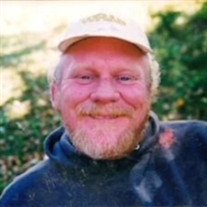 Michael John “Mike” Bussard was born March 4, 1953, in Columbus, Ohio, to the late Wallace and Juanita (Bryant) Bussard, and passed peacefully on August 18, 2021, at the James Cancer Hospital in Columbus, Ohio. Mike had a career as a juvenile drug and alcohol counselor, working primarily for the Lancaster courts and at Maryhaven. Later in life he worked as a truck driver until his retirement. Mike was a talented musician who started playing the double bass in fourth grade at Linden Elementary and never stopped. A bass or guitar was always propped nearby in the corner of every living room wherever he lived. A lifelong music lover, Mike went from playing in the school orchestra to local blue grass and country bands around Columbus as a young man. Also a skilled wood worker, Mike created bookcases, built Adirondack chairs and beautiful keepsake boxes that are treasured pieces in the family. He grew huge vegetable gardens, was always whistling a tune and loved each of the various motorcycles he owned in his lifetime. All of Mike’s life he was happiest when he was walking through a woods or sitting in a chair beside any lake, Alum Creek or family pond with his fishing pole or a book with him and his ever present cup of coffee. He was often accompanied by one of the many lucky dogs who found their way to Mike over his lifetime. Mike lived a full and robust life with a myriad of experiences and was a joy to be around for anyone who knew him. He was a rare person in that he had a large group of friends that went back decades, including many childhood friends that were still coming to visit with him towards the end of his life. He was a kind and spiritual man who was quick with a joke, had a sharp wit and saw the humor in nearly every situation. Providing loving care to his parents during their last illnesses, Mike often repeated that he felt so lucky to have “hit the jackpot” with his parents. He was a good son, brother, uncle and friend to many. Mike is survived by his brother, Pat Bussard, and his sister, Mary Harvey, both of whom had their lives, and certainly the lives of their children, enriched by having Mike in it, and will miss their beloved brother dearly. Mike is also survived by numerous nieces and nephews, who adored their Uncle Mike. He was the go-to guy to build giant bonfires at the farm where his parents, and after their deaths, he, resided for a time, and to teach them to make pots of chili and do woodworking projects and just hang out and talk about their lives. Numerous cousins survive throughout Ohio, Florida and California, each of whom contributed to what Mike always considered an ideal childhood; one surrounded by extended family at his Bussard and Bryant grandparent’s homes in Linden, summers spent with cousins at Glengary pool in Westerville and winters ice skating at Linden Park, where his Dad taught him to be an excellent skater. Mike is also survived by his girlfriend Claudette Boiteau, who lovingly cared for him during his illness this last year. The family is grateful to his many friends who reached out to him during his illness, especially Carrie Armbrust and Jill Thompson, for the unwavering support and assistance which they provided. Thanks also to his niece and goddaughter Jenny Bussard Durbin, for working to get him outside to sit in the sun that one final time on your last visit. Due to rapidly rising Covid cases and concerns, no formal service will be held. As per Mike’s wishes, his cremated remains will be spread by the family in a natural spot where he loved to visit, to be planned when his closet nephew is granted military leave and can attend.

Michael John &#8220;Mike&#8221; Bussard was born March 4, 1953, in Columbus, Ohio, to the late Wallace and Juanita (Bryant) Bussard, and passed peacefully on August 18, 2021, at the James Cancer Hospital in Columbus, Ohio. Mike had a career... View Obituary & Service Information

The family of Michael John Bussard created this Life Tributes page to make it easy to share your memories.

Send flowers to the Bussard family.