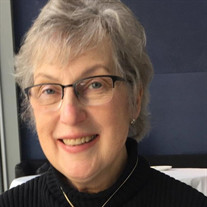 Mary Barbara Mayr, 72, of Powell, died in her home Thursday, June 10, 2021, following a long battle with breast cancer. She was born Nov. 22, 1948, in Cleveland to the late Jim and Mary Brucklacher; Barbara grew up in Findlay, OH where she graduated from Findlay High School in 1966. She attended DePauw University, Greencastle, IN, where she majored in microbiology and was a member of Delta Delta Delta sorority; she graduated in 1970 and became a medical technologist following additional study at MD Anderson Cancer Center in Houston. She married Bill Mayr on Sept. 25, 1971; they recently celebrated an early 50th Wedding Anniversary. Barbara worked as a medical technologist at hospitals in Lawrenceville and Olney, IL, as well as in St. Louis. Barbara joined Kingsdale Gynecologic Associates in Upper Arlington after her family moved to Columbus in 1986. Her home had been in the Scioto Trace subdivision on the Northwest Side until she and her husband moved to Powell last year. She was a member of Saint Mark’s Episcopal Church in Upper Arlington. Barbara was musically inclined; she enjoyed classical music and jazz, gave piano lessons, sang in church choirs and knew the lyrics to a surprisingly large number of 1960s-era pop/rock songs. She also enjoyed the outdoors, hiking during family vacations in national parks including Glacier, Grand Canyon, Great Smoky Mountains, Olympic, Rocky Mountain, Yellowstone, Yosemite and Zion, as well as the Green Mountains of Vermont and the Tucson Mountains and Santa Catalina Mountains of Arizona. She also enjoyed spending time at the family cottage at Lake Erie, including watching wonderfully colorful sunsets over the lake. In addition to her husband, survivors include daughter Catherine (John) Bowditch, Athens, OH, son Jim (Jory Samkoff) Mayr, Bloomfield, NJ, grandsons Nathaniel and Luke Bowditch and Julian Mayr and family friend Rodney Middendorf. The family thanks the nurses and aides of OhioHealth’s Hospice at Home program for their compassionate care. Donations in Barbara’s memory may be made to OhioHealth Hospice, 3430 OhioHealth Parkway, Columbus, OH 43202 or the James Fund for Life at The Ohio State University Comprehensive Cancer Center, Estate and Gift Planning, 14 E. 15th Ave., Columbus OH 43201. Family will receive friends on Monday, June 14 from 5 p.m. to 7 p.m. at SCHOEDINGER NORTHWEST, 1740 Zollinger Rd. A funeral service will be at 10 a.m. Tuesday, June 15 at Saint. Mark’s Episcopal Church, 2151 Dorset Rd. with interment to follow at Union Cemetery Association. Please visit www.schoedinger.com to share a special memory of Barbara with her family.

Mary Barbara Mayr, 72, of Powell, died in her home Thursday, June 10, 2021, following a long battle with breast cancer. She was born Nov. 22, 1948, in Cleveland to the late Jim and Mary Brucklacher; Barbara grew up in Findlay, OH where she... View Obituary & Service Information

The family of Barbara Mayr created this Life Tributes page to make it easy to share your memories.

Send flowers to the Mayr family.