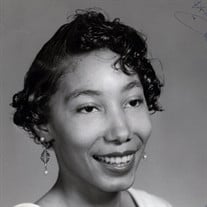 On the day of October 25, 2020, Mary Louise Johnson, died at the age of 84. Mary Louise was born to Joseph and Rosetta Fisher. In 1955, she married Lawrence M. Johnson, Jr., on September 12, in the state of Utah and together raised four children, Jemiscoe (Gigi), Lawrence III, Shaun, and Guy. She was raised on a farm in Mississippi and moved to Toledo, Ohio, as a teenager and went to Waite and Libby High Schools, Toledo, Ohio. She spent 20 years as an Air Force spouse living in Utah, South Carolina, twice in Japan, Dayton, Ohio, before settling in Columbus, Ohio. Mary managed the Rickenbacker Air Force Base Ohio Bowling Alley and the Golf Course cafeterias for a number of years before she worked and retired from the Columbus School District as a team member preparing meals for students in the district. After the working for the school district, she worked in the mail order department of the Victoria Secret Company, which was her favorite job. Mary was an avid gardener and loved to grow roses as well as delicious vegetables. For many a Spring, she would diligently plant an assortment of fine vegetable, tasty tomatoes, collards, and green beans, the family's favorites. Responsibility, loyalty, devotion to her family, and selflessness to others were the hallmarks of Mary's character. She was the glue that held her family together. She instilled in her children fortitude and salt of the earth values which enable them to be responsible citizens. Mary Johnson is survived by her husband, Lawrence Jr., her son Lawrence, and his wife, Kathleen, her son, Shaun, her son Guy, and her two brothers Henry and Mac. Mary was preceded in the death by her parents, Joseph and Rosetta Fisher, her sisters Annie, Hannabelle and Millie, her brothers, John, AG, JD, Charlie, and Joe, and her daughter, Gigi. A private funeral service will be held on Saturday, October 31, 2020 at the SCHOEDINGER EAST CHAPEL, 5360 E. Livingston Avenue, Columbus, OH 43232. All visitors will respectfully wear masks and comply with social distancing requirements. Please visit www.schoedinger.com to share a memory and send condolences to Mary's family or watch a live webcasting of the funeral service.

On the day of October 25, 2020, Mary Louise Johnson, died at the age of 84. Mary Louise was born to Joseph and Rosetta Fisher. In 1955, she married Lawrence M. Johnson, Jr., on September 12, in the state of Utah and together raised four children,... View Obituary & Service Information

The family of Mary Louise Johnson created this Life Tributes page to make it easy to share your memories.