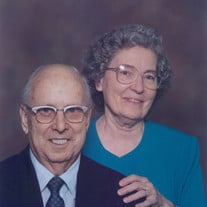 Mary Katharine (McGhee) Hutchison, born January 28th, 1925, age 96, passed away peacefully at her home in Grifton, NC, with her son at her bedside, at 12:15 pm on Wednesday, December 8th, 2021. She is preceded in death by her loving husband George Arthur “Art” Hutchison in 2010; her parents, Lee and Florence McGhee of Jackson, Ohio; Infant sister Mildred McGhee of Jackson; Brother Edward McGhee and sister in law Evelyn of Akron, Ohio; Sister Margaret McGhee of Columbus, Ohio; Sister Ruby Hutchings and brother in law Lester, of Springfield, Ohio; Brother in law Richard “Dick” Gibson of Fairborn, Ohio; Sister in law Grace McGhee of Jackson, Ohio; Niece Crystal L. Ryan of Westerville, OH; Nephew Paul Edward McGhee of Akron, Ohio; David McGhee of Jackson, Ohio; and Great Nephew Jon McGhee of Akron. She is survived by her son Rev. Paul A. Hutchison of Grifton, NC; daughter Linda Kay Russell (Paul) of Newark, Ohio. Grandchildren Kelly (Luke) Woodruff of Newport, NC; Rev. Amy Hutchison of Charlotte, NC; Megan (Carlos) Corona of Duncan, SC; Grant A Wright of Columbus, OH; Paul R. Wright (Shannon) of Newark, OH; Douglas L. Wright (Ali) of Upper Arlington, OH. 7 great grandchildren: Chase and James Wright, Charlie and Rosie Wright, Emmie and Owen Woodruff, and Carlos Corona, Jr. She is also survived by a brother Paul Dwight McGhee (Peggy) of Jackson, OH : Sisters Alice Gibson of Fairborn, Ohio and Eleanor Carpenter of Springfield, Ohio. Many nieces and nephews. Mary graduated from Jackson High School in 1942, and moved to Columbus shortly thereafter. She attended Columbus Business School and worked for Hughes Peters and Kriess manufacturing firms. She was known and respected by her employers for her outstanding shorthand skills, typing speeds and great attention to detail. Her sister Margaret introduced her to her future husband, George A. Hutchison, an accountant, and they were married in 1948. While her children were small, she worked weekends at The Ohio State University Hospital as a Ward Secretary on the maternity wards. This allowed her to be home with the children during the week while her husband could watch them on those weekends. She also typed tax returns and documents for the firm of H.G. Snyder, a job she could perform at home. Once Linda and Paul were older, she returned to the workforce, working for BancOne (formerly City National Bank), until she retired. Mary was a devout Christian, and served in many positions at the North Linden Evangelical Church from 1954 until 1968. She taught Sunday School, sang in the choir, typed the weekly church bulletins, served on various committees and was an active member of the Homebuilders Class. Many happy summers were spent at the family cottage at Stoutsville Church Camp. Later, she and her husband joined the Maple Grove United Methodist Church in Columbus. After she and her husband moved to Clover, NC in 2000, they became members of the Clover United Methodist Church where she continued to have many friends. Mary loved to read throughout her life, and she encouraged and helped her children and grandchildren to read and to love reading. She would read anything that would increase her knowledge about ANYTHING she didn’t understand. She always wanted to know more. She was a lifelong learner who didn’t need a college degree to prove it. Mary will be remembered as a kind, gentle, patient, and very loving Mother and Grandmother. Her joy in life was in helping others. She would often make hard choices, sacrificing her own needs for another’s, without complaint. She lived her faith. She will be greatly missed by all who knew her. A Memorial service will be held on December 29th at 11:00 am at Schoedinger Northwest Chapel, 1740 Zollinger Road, Columbus, Ohio with Rev. Karen Gebhart officiating. Visitation will be from 10:00 am until 11:00 am that day. Burial immediately following at Union Cemetery, Columbus, Ohio.

Mary Katharine (McGhee) Hutchison, born January 28th, 1925, age 96, passed away peacefully at her home in Grifton, NC, with her son at her bedside, at 12:15 pm on Wednesday, December 8th, 2021. She is preceded in death by her loving husband... View Obituary & Service Information

The family of Mary Katharine Hutchison created this Life Tributes page to make it easy to share your memories.

Send flowers to the Hutchison family.