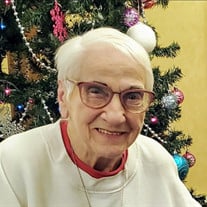 Mary Lou "Lou" Andrews, age 86 of Columbus, Ohio, died on Friday, May 14, 2021 at Claremont Retirement Village. She was born on January 1, 1935 in Franklin Township, Portage County, Ohio, the daughter of the late John Vitalis Wagner, and Emma "Babo" Katherine (Hafferd) Wagner. Lou played semi-pro baseball in her late teenage years and could hit a ball further than any boy in her neighborhood. She was a retired executive secretary, working many years for Management Horizons in Worthington, then for the Vickery, Riehl and Alter law firm in downtown Columbus. Lou loved dogs, both her own and those she watched while friends were away. Her other joys were gardening, crossword puzzles, listening to live music, spending time with grandchildren, and she may have been the biggest Elvis Presley fan on the planet. Apart from that, she reveled in being the undisputed "dog biscuit lady", regularly smothering all of the neighborhood dogs with love and treats. Lou is preceded in death by her parents and 7 brothers and sisters; Luke, Wayne, Maxine, Glenna, Paul, Jean and John. She is survived by her brother Jimmy (Sue) Wagner, sons Kyle Andrews and Kurt (Judy) Andrews, and grandchildren Andrew Creamer and Bridget (Nathan) Ireland and great grandchildren Vincent, Quinton, and Declan. Per Lou's wishes there will not be any calling hours or services. Arrangements were entrusted to the care of Schoedinger Funeral and Cremation Service in Columbus, OH. In remembrance and in lieu of flowers, Lou would be smiling in heaven if you decided to make a donation to Susan G. Komen (komen.org), the Alzheimer's Association (alz.org) or Columbus Humane (columbushumane.org)

Mary Lou "Lou" Andrews, age 86 of Columbus, Ohio, died on Friday, May 14, 2021 at Claremont Retirement Village. She was born on January 1, 1935 in Franklin Township, Portage County, Ohio, the daughter of the late John Vitalis Wagner, and... View Obituary & Service Information

The family of Mary Lou Andrews created this Life Tributes page to make it easy to share your memories.

Send flowers to the Andrews family.