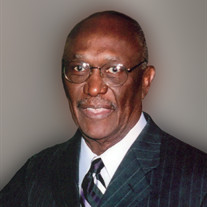 Marvis Engram Sr. was born on March 18, 1933 to H.C. Engram and Desibell (affectionately known as Dezzie Bell) Bass Engram in New Brockton, Alabama. On Thursday, October 21, 2021, an angel of God escorted him home to be with the Lord. His life was dedicated to his family, his faith, and his country. Desibell and H.C. had two children, Mary Agnes and Marvis. They moved from Alabama to Blountstown, Florida. Marvis attended Mayhaw High School where he was a star basketball player. In 1948 the family moved to Cincinnati, and Marvis graduated from Central Vocational High School in 1951. He met and fell in love with Georgia Holland. Marvis joined the United States Army in 1952 and returned that year to marry Georgia. From this union they had two children, Marvis Jr. and Janice. The family travelled the world, with Marvis Sr. stationed in Germany and the Panama Canal Zone. Stateside they lived in Fayetteville, North Carolina (Fort Bragg), Cincinnati, and finally Columbus. A member of the U.S. Army's Special Forces (Green Berets), Marvis Sr.'s tours of duty also included Laos and Vietnam. For his service in Vietnam he was awarded The Bronze Star in March 1967. He also was awarded two Army Commendation Medals. Marvis Sr. concluded his service in 1973, attaining the rank of Sergeant First Class. His last posting was in Columbus as a Recruiter. After leaving the Army, Marvis Sr. was employed by Sears and Roebuck until 1991. The final chapter in his career was working for the State of Ohio Environmental Protection Agency, retiring for the final time in 1995. Marvis Sr.'s retirement was focused on his family. He especially cherished trips with his grandchildren to the Circle City Classic in Indianapolis and Columbus Clippers games. Marvis Sr. was a faithful and active member of Second Shiloh Baptist Church for over 25 years. A member of the Men's Choir, Marvis Sr. was recognized by the congregation for his devotion, wisdom and good humor. Although he held no official position in the church, Marvis Sr. was acknowledged as a leader by all. Preceded in death by his loving wife Georgia, his parents H.C. and Desibell (Bass) Engram, and his sister Mary Agnes (Engram) Smith, Marvis Sr.'s legacy carries on through his son Marvis Engram Jr. (Verneda) and daughter Janice D'Alessandro (Mark), grandchildren Verneda LeeAnn Engram, Marvis Engram III (Cearia), Allison Williams (Nelson) and Jarrell Cook (Amirah), great grandchildren Aaliyah Syfax, Marissa Engram, Pharaoh Williams, Melody Engram, Camille Knight and Cameron Grogg, four sisters in law, and a host of nieces, nephews and friends. The family will receive friends on Friday, October 29th from 10-11am at SCHOEDINGER NORTHEAST, 1051 E. Johnstown Rd, Gahanna, a funeral service will follow. Interment will occur at Glen Rest Memorial Estates.

Marvis Engram Sr. was born on March 18, 1933 to H.C. Engram and Desibell (affectionately known as Dezzie Bell) Bass Engram in New Brockton, Alabama. On Thursday, October 21, 2021, an angel of God escorted him home to be with the Lord. His... View Obituary & Service Information

The family of Marvis Engram Sr. created this Life Tributes page to make it easy to share your memories.

Send flowers to the Engram family.