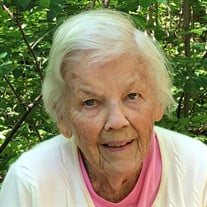 Martha Ann McCormac, 92, of Worthington, transitioned peacefully from this world surrounded by her loving family on Monday, January 4, 2021. She was a New Year’s baby, born January 1, 1929 in Shreve, Ohio. However, she never could fully appreciate all the football games that were held on her birthday! Preceded in death by her husband John, to whom she was married for 66 years, father Paul and mother Grace, son John and sister Mary. Survived by sons Jim and Mike, Mike’s wife Patrice and their children Kevin, Luke, Katie and Megan, and son John’s (1960 – 2000) wife Tammy and their children Shawn, Tara and Crista and great grandson Callum, and many nieces and nephews. Affectionately known by many as Granma Martha. Martha graduated from Muskingum University in 1951, and in addition to being awarded a Bachelor of Arts degree in Education, she met her husband John at Muskingum. Out of college, she embarked on a career in teaching elementary school students, until her children came along. She then launched the even more challenging career of raising three boys. Her lifelong love of swimming led to her involvement as a longtime competitor on “Synch-or-Swim” a Columbus-based master’s division synchronized swimming team which won the national championship twice. Martha was extremely generous with her time and resources; and shared the family swimming pool with countless people over the years. Scores of kids learned to swim under her tutelage. Martha was a longtime member of the Daughters of the American Revolution (DAR) and the Philanthropic Educational Organization, as well as Dwell (formerly Xenos) Community Church. Along with husband John and her sons, Martha was a longtime nature enthusiast and conservation advocate, and loved gardening. She greatly appreciated the myriad wild creatures – birds, butterflies, squirrels and more – attracted to her Worthington yard courtesy of her green thumb. In lieu of flowers, donations in her name can be made to the Ohio Chapter of The Nature Conservancy, 6375 Riverside Drive, Suite 100, Dublin, OH 43017.

Martha Ann McCormac, 92, of Worthington, transitioned peacefully from this world surrounded by her loving family on Monday, January 4, 2021. She was a New Year&#8217;s baby, born January 1, 1929 in Shreve, Ohio. However, she never could fully... View Obituary & Service Information

The family of Martha McCormac created this Life Tributes page to make it easy to share your memories.

Send flowers to the McCormac family.