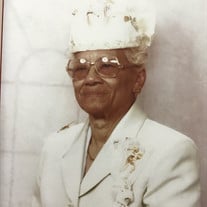 Minister Marjorie Sims was born in Chicago, Illinois on September 6, 1929 to Emma Alice (Adams) Williams and Mark Anthony Williams. Her stepfather, Edward Moody Sr. and mother raised her. Her parents and siblings, James Richard Williams and Alice Jean Lyons preceded her in death, as well as her Aunt Alma Adams, who was more like a grandmother than Aunt. Edward Moody Jr. is her surviving sibling. She graduated from Chicago's DuSable High School. Marjorie married her life long sweetheart, Henry Sims Sr. From that union was born her children: Veronica (Michael Roberts) Sowell, Venurea E. Fitzpatrick, HenriAnn (Jerome) Franklin and Henry Sims Jr. Her grandchildren: Calvin C (Megan) Sowell, Raimeca D. Fitzpatrick, Henry (Radika) Sims III, Raimere S (Janine) Fitzpatrick, Shiree (Clint III) Bryant. Great-grandchildren: McKenzie, Morgan and Mikaela Sowell; La Teesha (Joshua Jones) Fitzpatrick; Kristale, Brent, Jyrale Sims; Kastaisja Harper. Great-great grandchildren: Clint IV, Serenity and Cepreme Bryant; Jerimiah and Reina Jones; Kai and Kaleb Harper; Kassidy Brant. She leaves behind a host of nieces, nephews, other relatives and many friends. As a military spouse, Marjorie was active in many organizations that supported enlisted military wives and youth. Along with her husband, she was a member of Retired Air Force Association. She worked for a short time and was a union steward for B.F. Goodrich. Marjorie was a member of the Order of Eastern Star, Grace Chapter 100 as well as a GNLD Distributor. Marjorie served as the family matriarch and was dearly loved and respected. She dedicated her life to her family, friends and her church. She joined the Corinthian Missionary Baptist Church in 1959. She served as the church's first Usher. Over the years she was a member of various ministries: Nursing, Food Pantry, Sunday School, Mission Society, Youth Choir Advisor, Pastor's Partners and served as Mother of the Church. In 1997 she was ordained into the Ministry. Although her faith was sometimes tested, Marjorie remained steadfast in her walk with the Lord throughout her life. A private service will be held on Tuesday, October 6, 2020 at Corinthian Missionary Baptist Church, 3161 E. 5th Street, Columbus, OH, 43219, with a private burial at Glen Rest to follow.

The family of Marjorie Sims created this Life Tributes page to make it easy to share your memories.

Minister Marjorie Sims was born in Chicago, Illinois on September...

Send flowers to the Sims family.