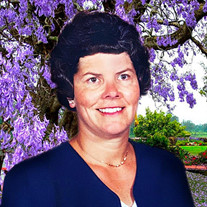 Marilyn Ann (Ellsworth) Faircloth, age 82, of Dublin, formerly Worthington, passed away peacefully at Kobacker House on August 2 with her loving son and daughter by her side. Marilyn was born in Bowling Green, OH on 9/23/38 to David Ellsworth and Alberta (Kohring) Ellsworth. She was a graduate of Bowling Green High School Class of 1956 and Wittenberg University Class of 1960 where she was a member of Alpha Delta Pi Sorority and Kappa Delta Epsilon, an honor society for education. She met her future husband, David Faircloth, while they both were attending a wedding of mutual friends in 1959. Their paths crossed again a few years later when those mutual friends set them up with a first date to an OSU football game and they were married less than a year later in 1963. She taught for Columbus Public Schools for 7 years (5 ½ years - 4th grade, 1 ½ years - Inaugural Title 1 Reading Improvement Program). She spent the early childhood years at home with her children and once they entered school she worked several years part-time as a secretary, bookkeeper and doing clinical transcription. She was voted Bowling Green High School's first Student Council Queen and during the Summer of 1956 she was chosen as the first Wood County Junior Fair Queen from members of the 4-H Clubs. As a freshman at Wittenberg, she represented the Lambda Chi fraternity as their Greek Week Queen. Marilyn was always very athletic and musical in high school and college. She played the clarinet in her high school and college bands. During her senior year in high school, she played the glockenspiel, and had the unique talent to play music by ear. She always wanted to be a majorette, but never had any lessons. After teaching herself, she tried out for college majorette and made it her freshman year as a sub and the last three years as a full-fledged majorette. She learned to play tennis while in her freshman college gym class and both singles and doubles became a recreational pursuit during much of her life. Outdoor volleyball was another favorite sport along with learning clogging and line dancing. Swimming was a sport she pursued later in life. After countless hours by the pool listening to her children's swim instruction, she learned the freestyle, backstroke, and even attempted butterfly and flip-turns with direction from her son. Another lifelong passion was knitting and counted cross-stitch. She spent many hours in the sun by the pool, in the backyard, and on vacations working on her projects. She enjoyed planting flowers, working in the yard and reading books as she became more limited in what she could do. She volunteered for 41 years working the leaderboard during the The Memorial Golf Tournament, benefitting Nationwide Children's Hospital and other Central Ohio charities. She was 1 of only 9 volunteers who had completed 40 years when she was honored for her service. Marilyn took great pride and spent many years researching and putting together the genealogy on both sides of her family. It gave her great joy to share her findings with extended family. She always put family and friends first and was faithful in staying connected throughout all aspects of her life. Her children and granddaughter were the light of her life. She was dedicated and very proud of her two children, had many fond memories of their vacations together and loved time spent with her granddaughter. She was preceded in death by parents, David and Alberta (Kohring) Ellsworth and her loving husband of 55 years, David Faircloth. Survived by son, Craig Faircloth; daughter, Kimberly (Faircloth) Felix; and granddaughter, Ellie Felix; sister, Nancy (Ellsworth) Haney; brothers, Don (Lee Ann) Ellsworth, Rich (Laurie) Ellsworth; nieces, Katy, Susan and Joanna; nephews: Nathan, Matt, Ben, Zach. Calling hours will be Tues. Aug 10 from 4-7pm at SCHOEDINGER WORTHINGTON CHAPEL, 6699 N. High Street, Worthington, OH with funeral service at 11am on Wed, Aug 11 at Upper Arlington Lutheran Church, 2300 Lytham Rd, Columbus, OH followed by burial at 2 PM at Union Cemetery. In lieu of flowers, donations in Marilyn's memory can be made to Nationwide Children's Hospital http://give.nationwidechildrens.org/goto/Marilyn_Faircloth or Upper Arlington Lutheran Church, 2300 Lytham Rd, Columbus, OH 43221.

Marilyn Ann (Ellsworth) Faircloth, age 82, of Dublin, formerly Worthington, passed away peacefully at Kobacker House on August 2 with her loving son and daughter by her side. Marilyn was born in Bowling Green, OH on 9/23/38 to David Ellsworth... View Obituary & Service Information

The family of Marilyn Faircloth created this Life Tributes page to make it easy to share your memories.

Send flowers to the Faircloth family.