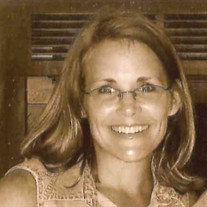 Margaret Jean (Johnson) "Peggy" Brady was born on July 18, 1963 in Columbus, Ohio to Edna and Chuck Johnson. She graduated from Grove City High School and later pursued and obtained a Financial and Business Management Degree from Franklin University. After a stint in retail, Peggy worked in banking, most recently employed as a commercial lender with CFBank. Peggy's ultimate goal in life was to be a mother. She married her husband and friend, Martin, in 2003 and became an instant mom to stepsons, Tyler and Ryan. Peggy converted to Catholicism and was a member of St.Timothy Parish. They all welcomed Quinn (who was Peggy's greatest treasure and the light of her life) to their family in 2004. She was equally devoted to all 3 boys and was often darting from one activity to the next with them- usually hockey - and it was undoubtedly in this role that she thrived. Peggy was also a lifelong Buckeye fan in a house full of Wolverine fans. Peggy will be remembered for her spunk and fire. As her memory faded, she never lost the ability to throw out colorful four-letter words, sing, smile, and dance. She captured the hearts of her caregivers and family at Galena Manor, and we will be forever grateful for the staff there - especially for Krista and Debbie. We never had to worry whether Peggy was being loved and cared for- she was. In addition to Martin, Quinn, Tyler and Ryan (and her dogs), Peggy is survived by her siblings, Dodie Johnson, Jodie (Don) Cunningham, Lori Johnson, Mike "Homer" (Linda) Johnson, and Jim (Susan) Johnson; as well as her special aunt, Sue (Jim) Jones. She is also survived by siblings-in-law, Jim (JoAnn) Brady, Andrew (Alicia) Brady, Chris "Chet" (Tina) Brady, Margaret (Rob) Arena, and Joe (Emily) Brady; and her mother-in-law, Marge Brady, who provided care for her at home. She is preceded in death by her father-in-law, Ed Brady of Westerville; and parents, Chuck and Edna Johnson of Grove City. Peggy also leaves behind many nieces, nephews, and great-nieces and nephews to whom she will always be remembered as the "cool aunt." She has a slew of friends from as far back as elementary school who will remember her as being fun and fun-loving. May Peggy now find a golf club, tennis racquet and a big garden so she can enjoy the hobbies she had to give up. May there be lots of dogs to pet and kiss, and may she find peace and wholeness of mind and spirit that eluded her in her final years. Calling hours will be from 4-7pm, Wednesday March 24th at Schoedinger Worthington, 6699 N. High St. Mass of Christian burial will be at 10am, March 25th at St. Timothy's 1088 Thomas Lane. Fr. David Poliafico celebrant. Masks required for all in attendance. A livestream of the mass will be available on the church website. Memorial contributions can be made to The Mount Carmel Hospice, 1144 Dublin Rd, Columbus, OH 43215, in her memory. Condolences may be sent to the family at www.schoedinger.com

The family of Margaret "Peggy" Brady created this Life Tributes page to make it easy to share your memories.

Send flowers to the Brady family.