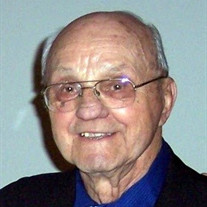 Louis Treneff, 94, passed away peacefully Wednesday, March 3, 2021, following complications from COVID-19. He was born May 6, 1926, in Mansfield, Ohio to the late Tanas and Spacia (Yovanovski) Treneff. He was a decorated U.S. Army veteran who served during World War II as a lead scout in the 10th Mountain Division in Italy. He earned a Silver Star and a Bronze Star among other military honors. Lou moved to Columbus following his discharge and joined the Columbus Police Department in 1951, retiring after 31 years of service to his community. He was a devoted husband and father, a member of Our Lady of Perpetual Help parish where he served as an usher, and a proud resident of Grove City where he coached summer baseball for many years. In addition to his parents, he was preceded in death by his wife Helen (Pastor); brothers Alex, Christ and George; sisters Helen (Traikoff) and Daisy (Traphagan) and infant grandson Matthew. He is survived by daughter Kristina Wolf; sons Mike (Beth), Tony (Suzanne) and Nick (Donna); grandchildren Shannon Fitzpatrick, Nina (Ismael) Mendoza, Angie (Marcus) Chesnut, Colin, Emma, Jocelyn and Jack Treneff; great-grandchildren Ashley, Hannah and Mike Chesnut; many nieces and nephews, neighbors and dear friends, including Harry Lehan and Joe Parry. Lou loved his years spent in Grove City and was always up for a round of golf, playing frequently and tinkering with his swing well into his 90s. An avid supporter of the Ohio State Buckeyes, Cincinnati Reds and Bengals, he rarely missed a game on TV. He will be greatly missed by his loving family. Private Mass of Christian Burial will be celebrated at Our Lady of Perpetual Help Church. Entombment St. Joseph Cemetery. In lieu of flowers, contributions may be made to Mother Angeline McCrory Manor or The Villas at St. Therese Assisted Living. The family extends its gratitude to the caring and supportive staff at the Villas at St. Therese, Mother Angeline McCrory Manor and Capital City Hospice. Arrangements by Schoedinger Grove City. Visit www.schoedinger.com to share a special memory or extend condolences.

Louis Treneff, 94, passed away peacefully Wednesday, March 3, 2021, following complications from COVID-19. He was born May 6, 1926, in Mansfield, Ohio to the late Tanas and Spacia (Yovanovski) Treneff. He was a decorated U.S. Army veteran who... View Obituary & Service Information

The family of Louis "Louie" Treneff created this Life Tributes page to make it easy to share your memories.

Send flowers to the Treneff family.