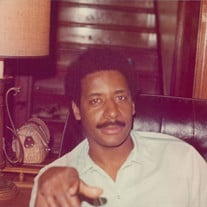 Lorenzo (Rennie) Clifford Walker, 77 Lorenzo C. Walker 'Rennie' was born in Columbus, Ohio to Lillie and Charles Walker, Sr. He was the sibling of a sister, Linda Walker and two brothers, Charles Jr. and Alonzo Walker. Lorenzo attended and graduated from West High School class of 1962. In 1965 he joined the US Army. Upon returning from the Army, he attended OSU, Columbus State, and various apprentice schools before becoming a union electrician with I.B.E.W. Local 683 in 1971. In June 2009 he retired from the union. He had been a union member for 50 years. He married Consuelo Williamson, May 8, 1971, in Columbus, Ohio and had been married for the last 50 years. He loved to do things with the family and travel. He also enjoyed going to baseball card and comic book shows when our sons were younger. He looked forward to seeing OSU, Cleveland Browns playing football and OSU basketball. He would spend hours working flat and 3D puzzles and was an avid reader. Lorenzo was preceded in death by his father, Charles Walker Sr., stepfather Earl West, mother Lillie West, brothers Charles Walker Jr., and Alonzo Walker; sister, Linda Walker. He leaves to cherish his memory his wife Consuelo Walker, son Kermit Walker (LaTonya) of Newport News, Virginia; son Kurtis of Columbus, Ohio; Sister-in-law Claudia Walker of Williamsburg, Virginia; grandchildren: Kaia, Allie and Isaiah Walker of Newport News, Virginia; Nieces Renee Walker and April Blunt of Williamsburg, Virginia; nephews Eric Walker of Baltimore, Maryland and Darryl Walker of Atlanta, Georgia; plus great nieces, great nephews, great-great niece, and cousins. The family would like to thank Mt. Carmel Hospice, Dr. Barb Changizi, Nurse Chris, and those praying for us during Lorenzo's long battle with Parkinson's Disease. May God richly bless each of one of you. The family of Lorenzo Walker

The family of Lorenzo Clifford Walker created this Life Tributes page to make it easy to share your memories.

Send flowers to the Walker family.