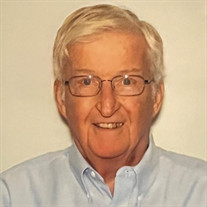 Lockwood Zeis, age 87, passed away peacefully surrounded by his family on Tuesday, December 21, 2021. Lockwood was born on September 12, 1934, in Toledo, Ohio to the late Frederick and Imogen Zeis. Lockwood graduated from Port Clinton High School in 1952 and from Miami University in 1956. He was a member of Immaculate Conception Catholic Church. Lockwood served his community as Port Clinton's President of City Council 1965-1967 and as the city's Mayor in 1968-1971. As a Charter member and president of Port Clinton Jaycees, he received the organization's Ohio's Outstanding Local President in 1963 and Awarded Junior Chamber International Senatorship and Life membership. He served 30 years on the Board of Trustees of H.B. Magruder Hospital, serving 1993-2000 as Board Chairman. Lockwood was a 25-year member of Port Clinton Kiwanis Club and served on their board of directors. He was a life member and past Home Association Chairman of Knights of Columbus Council #1750. As part of the business community, Lockwood joined Tadsen Agency Inc in 1956 and served as the President. He served many years on the board of directors of the American Bank. He was a member and past president of Ottawa County Association of Independent Insurance Agents. He was also a member and past Treasurer of Ottawa County Employers and Manufacturers Association. "Lock" and "Janie" were anchors of the Ottawa County Museum on Third Street in Port Clinton. Lockwood's dedication to preserving local history was reflected in the planning, building, and setting up of the museum's addition, The Zeis Wing, dedicated in 2010. He also served as a board member for the Museum. Friendships gained through social clubs were a great joy to Lockwood. Much of his time, energy, and source of entertainment come from his nearly lifelong membership in the Port Clinton Yacht Club. In 1976, he served as the club's Commodore. He held many offices and chairmanships for PCYC including several years as Race Committee Chairman for Green Island and Snow Flurries regattas. He chaired the club's centennial committee in 2006. Lockwood was also a member of Power Squadron and served as its Public Relations Officer. Since 1956, he was a member and past president of the Colonial Club. Lockwood will be deeply missed by his loving wife of 67 years, Mary Jane (Crohen) Zeis; children Angie (Michael) Dale, Diane (Jim) Stein, Paul (Sharon) Zeis, Cathy (Dick) Holz, Sara (Ted) Marquis; grandchildren Robbie Fox, Ryan McNally, Katlin (Jeff) Arps, Joe Stein, Nick Stein, Evan Zeis, Steven Zeis, Kevin Holz, Lauren (Matt) O'Brien, Kelsey (Kyle) Leab, Alex (Peter) Falzarano, Mackenzie Marquis, Sydney Marquis; great-grandchildren Logan Lockwood O'Brien, Leah Jane Falzarano; sister Susan Payne; brother-in-law and sister-in-law Bill and Jan Crohen; and numerous nieces and nephews. In lieu of flowers memorial contributions may be made to Immaculate Conception Church and/or School, 414 Madison St, Port Clinton, OH 43452 or Ottawa County Museum, P.O. Box 845 Port Clinton, OH 43452. Family will be having a Celebration of Life in the spring of 2022. Please visit www.schoedinger.com to share memories and condolences. Funeral arrangements entrusted to SCHOEDINGER NORTHWEST.

The family of Lockwood Zeis created this Life Tributes page to make it easy to share your memories.

Lockwood Zeis, age 87, passed away peacefully surrounded by his...

Send flowers to the Zeis family.