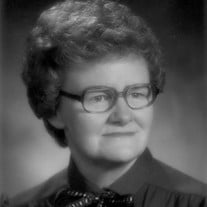 Leona Agnes (Fischer) Mourad, lifelong learner and teacher, passed away peacefully on August 23 in Hilliard, OH. She was 95. Lee was the fourth oldest of eight children born to Joseph P. Fischer Jr. and Theresia (Neu) Fischer of Royalton, MN. Her father's illness and death during the Depression prompted a young Lee to make a decision about her future: She would become a nurse. Through her junior high and high school years, Mourad lived with relatives in Minnesota and family friends in Montana. Those experiences taught her the value of family ties coupled with an independent spirit. Lee excelled at academics and secured a Cadet Nurse Corps scholarship to pursue her RN studies at St. Elizabeth's Hospital in Dayton, OH. From there, she worked her way through an undergraduate degree from The Ohio State University to enable her to teach good nursing care as well as to deliver it. Dr. Mildred Newton, legendary head of the then School of Nursing at Ohio State, hired her as an instructor, and Lee's long career as a nursing educator was launched. Mourad's fascination with the human body enabled her explain its complex systems and operation like few others. As a result, students left her classes and clinicals understanding the science behind excellent nursing care. She considered it a privilege to teach, and Lee's dedicated efforts earned her the College of Nursing's Outstanding Educator Award three times. In addition to curricular, classroom, and clinical responsibilities, Mourad was a prolific author, writing often about orthopedic nursing topics. One of her textbooks was selected Book of the Year by the American Journal of Nursing. Mourad also developed a myriad of instructional materials, including review sessions for students preparing for the NCLEX exam. In retirement, she taught those review sessions across the country and continued her professional writing. For fun, she penned an autobiographical mini-book that detailed her Depression-era childhood. Throughout her career, Mourad was active in Sigma Theta Tau, the international nursing honor society. She also volunteered tirelessly with the Ohio Division of the American Cancer Society, serving on the Board of Trustees and promoting the Nurse Hope of Ohio program. The ACS honored her ongoing contributions with their prestigious St. George Medal. In 1974, Mourad was chosen Outstanding Alumna for the College of Nursing, and in 1984 she retired with Associate Professor Emeritus status. Outside of work, Lee loved to travel with her beloved husband, A. George Mourad, cheer on the Buckeyes, win at RummiKub, compose odes upon the birth of a family member, and entertain. She mastered George's native Syrian cuisine and was often teased about her extravagant "second turkey" meals. Lee cherished the role of mother and never missed an opportunity to brag about daughter Valerie, despite her non-medical career choice. The two shared a special bond that eventually stretched to include two treasured granddaughters and five much-loved great grandchildren. Lee is predeceased by her parents, six of her seven siblings, numerous Fischer, Neu, and Mourad relatives, and the love of her life, George. Left to celebrate her presence in their lives are daughter Valerie and favorite son-in-law John Wilson of Hilliard; granddaughters Sarah (Brian) Burke of Westlake, OH and Emily (Kenton) Smith of Carmel, IN; great grandchildren Moira, Fiona and Colm Burke and Gabrielle and Marjorie Smith; sister Margie Duffey of Whitehall, MT; Mourad sisters/brothers-in-law, dozens of nieces and nephews, especially niece and goddaughter, Dr. Mary Schipper of Las Vegas, NM. The family is deeply grateful to the staff, aides and nurses, especially Teri and Jen, at Hilliard Assisted Living and Memory Care and to Capital City Hospice personnel Marisol, Florence, and Danielle for their caring professionalism. Calling hours will be 2-4 p.m., Sunday, August 29, Schoedinger Dublin, 5980 Perimeter Drive. (Masks optional but suggested). Mass of Christian Burial on Monday, August 30, at 11 a.m., St. Brendan the Navigator, 4475 Dublin Rd., Hilliard. Mass live-streamed at: Webcast. In lieu of flowers, kindly consider a memorial contribution to the American Cancer Society, PO Box 42217, Cincinnati, OH 45242, or American Cancer Society.

The family of Leona Mourad created this Life Tributes page to make it easy to share your memories.

Send flowers to the Mourad family.