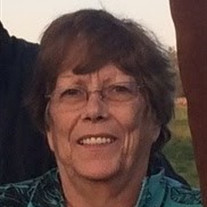 Lenore Susan Stafford Jurg, 72, passed away on January 15, 2021 in Dublin, Ohio. She was born on February 11, 1948 in Montreal, Quebec, Canada to the late Gwendolyn Halliday and Thomas Stafford. Lenore (Lee) grew up with her three siblings, Tommy, Timmy and Gina, in Montreal. After graduating from Villa Maria Convent, which was a high school run by nuns in Montreal, Lenore began working as a dental hygienist in downtown Montreal. She married her husband Anthony in 1972 and had their first- born son, Russell, in 1975. She was happy to become a full time stay at home mom. In 1981 she welcomed their second son, Ryan, into the world. She absolutely loved being a mom to her two sons. She did everything with them, making sure they had an amazing childhood, supporting her sons in everything that they did. Taking care of her children was a dream come true for her. In 1991, after the passing of her mother, Gwendolyn, an amazing job opportunity for her husband, Anthony, came up to move her family to the United States. Her family decided to move to Dublin, Ohio in August of 1991. The transition of moving to a new country was very difficult for her in the beginning while she was still grieving from the loss of her mom. But Lenore had a natural ability to make friends easily with her sweet, genuine nature which eventually made her settle into her new surroundings. Once her boys were old enough, she decided to follow her passion of working with animals and became a certified professional groomer for dogs and cats. She had always loved being around animals as a young child growing up in Canada. By becoming a groomer, it gave her an opportunity to find a career that she absolutely loved doing every day. Over her 20-year career as a groomer, she became one of the best and sought-after groomers in central Ohio with her attention to detail and making her customers' pets feel safe. You could say she was "the pet whisperer for grooming". When she was younger, she loved to ride horses out west in Jasper, Alberta, Canada while she worked at a student-run hotel in the summers. She loved everything to do with nature and was very spiritual. Lenore loved all kinds of music and loved to watch movies, especially in the movie theaters to watch the newest movies with both sons, Russell and Ryan. Before or after the movies, she loved going to lunch or dinner with her sons. She enjoyed playing board games and cooking up meals in the kitchen with her husband. In her free time, she enjoyed meeting up with her son, Russell, at the park to watch her granddog, Oakley, play with her ball or with other dogs. She enjoyed reading meaningful poetry quotes, wide ranging books, and also believed in the power of astrology with horoscopes. She took pleasure watching game shows in the mornings, watching her favorite soap operas during the afternoons, and loved watching "Dancing with Stars" on Monday evenings. Heaven gained another angel. Lenore was always very giving and caring for everyone around her. She was someone that always wanted to help people out in whatever way she could, whenever she could. She gave so much of herself unconditionally, even when she wasn't strong. She was always charitable, so it is no surprise that her last gesture of her life was selfless. Her last wish was to be a organ donor. And because of this gift there are three families that we now share a special bond with. She truly has the heart of an angel. There are no words to describe how much she will be missed and how much she was loved by so many. Lenore is survived by her husband of almost 50 years, Anthony; her eldest son, Russell; her youngest son, Ryan; older brother, Tom Stafford, younger sister, Georgina McCutchon; her two loved dogs, Oakley and Lulu; and six nieces and nephews in Canada and in the Netherlands. Lenore is in a better place now with her mother, Gwendolyn, who passed away in 1991, her father, Thomas, who passed away when Lenore was only 5 years old, her brother, Tim, who passed recently in 2018, her loving grandparents and all the loved pets she has had throughout her life. May you Rest in Peace and feel all the love and comfort now being reunited with all your loved ones in Heaven. Arrangements entrusted to SCHOEDINGER DUBLIN. Due to the current circumstances, a private service will take place on Thursday, January 21, 2021 at 11am.

Lenore Susan Stafford Jurg, 72, passed away on January 15, 2021 in Dublin, Ohio. She was born on February 11, 1948 in Montreal, Quebec, Canada to the late Gwendolyn Halliday and Thomas Stafford. Lenore (Lee) grew up with her three siblings,... View Obituary & Service Information

The family of Lenore S. Stafford Jurg created this Life Tributes page to make it easy to share your memories.