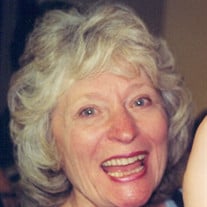 Lenore "Toni" Hightower Auch, age 88, passed away at First Community Village on Wednesday December 30th, 2020. Toni was born in Baltimore, Maryland on September 27th, 1932, daughter of William Myron and Antoinette Hightower. The balance of her life was spent as a resident of Central Ohio. She is survived by her husband of 62 years, Stephen E. Auch, married on May 31st, 1958; her four sons, Timothy (Kirsten), Stephen J., Todd (Christine) and Andrew (Mary); Six grandchildren, Owen, Elizabeth (Todd), Logan, Marlena (Timothy), Madeleine, Audrey (Andrew); brothers, Joseph (Louisville, KY), William (Phoenix, AZ) and Marshall (Dresden, OH) as well as several nieces and nephews. She was predeceased by her daughter, Jennifer. Toni graduated in 1950 from South High School and went to The Ohio State University where she was involved in many activities: one of the early female cheerleaders, acting or working in many theatrical projects, Women's Self Government Association (President), Alpha Xi Delta Sorority, Honorary Societies including Mortar Board, Awarded the Outstanding Woman in Activities at OSU in 1954, and received two degrees: B.S. - Education Cum Laude (English and Drama) in 1954 and B.A. - Psychology in 1956. Toni was active and creative in post graduate years as: Assistant Dean of Women at University of Miami in Florida and at OSU, Head Resident of a dorm at Ohio State University and taught at the Havana Business University in the summer of 1957 just before the Cuban Revolution. Toni was Dean of Women at Capital University in 1958-59. She was a member of Upper Arlington Lutheran Church as well as being a member of the following organizations: Junior League (various positions and Board Member), Pleasure Guild of Children's Hospital (President), Childhood League (Merry Go Round Chair, Creative Director of the annual fundraising musical production for 15 years), Member of Central Ohio Theatre Roundtable, Vaud-Villities (Annual Musical/Dance Production) Member for 42 years and was Co-Director then Managing Director for 22 years, Creator and Director of annual Jones Junior High musical variety show for 8 years, Volunteer for Children's Hospital and Ohio Theatre support groups, Media Center volunteer at The Memorial Tournament from its inception, elected to the Board of Trustees of the Ohio State University Alumni Association, and selected by Upper Arlington Rotary Club as a Northwest Woman of the Year in 1979. She wrote original plays which were performed by Junior League Trouping Theatre and Pleasure Guild. Showing her passion for theatre, Toni would often manage to see four Broadway shows in three days on numerous trips to New York City with Steve. She enjoyed conversation, spending time with her grandchildren, music, theatre, raising Golden Retriever dogs for 50 years, all thing Ohio State University, traveling and reading. Toni was a kind and selfless person who loved to laugh. It was said that she never had a bad word to say about anyone and that she was a "breath of fresh air". Visitation with the family of Steve and Toni Auch will be held from 4pm to 7pm on Friday August 13th at SCHOEDINGER NORTHWEST, 1740 Zollinger Road, where the funeral service will be held at 10 am on Saturday August 14th. To share a special memory of Toni with her family or to send a condolence, please visit www.schoedinger.com.

The family of Toni Auch created this Life Tributes page to make it easy to share your memories.