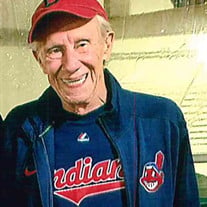 Larry Goldbach passed away on Friday, June 18, 2021. He was born on May 11, 1943, in Lakewood, Ohio, to Fred and Betty Goldbach. Larry grew up in Avon Lake, Ohio, with his three siblings. He loved the city of Cleveland and Lake Erie. He was a lifelong Cleveland Indians, Browns, and Cavaliers fan. Larry served in the Army in Vietnam from March 1965 to March 1967. After his military service, he moved to Columbus, where he attended the Ohio State University and became a devoted Buckeye fan, a devotion that lasted throughout his life. All who knew Larry admired his quick wit and his vast wealth of knowledge, which he acquired through his conversations with people and his love of reading. He enjoyed watching Jeopardy with his family and often knew most of the answers. He had a kind and generous heart and was always the first to give help to anyone in need. Over a 30-year period, Larry built a successful career in the field of mortgage-title insurance, and he was well-respected by his colleagues and clients, many of whom became friends. Larry married Deb, the love of his life, and they spent 38 years riding the ups and downs of life together. He was a loving husband and a devoted father to his four children. Larry loved listening to music (especially rock and roll), boating, and caring for animals (especially the many dogs he had throughout his life), but mostly, Larry loved being with his family. In addition to his parents, Larry is predeceased by his sister Marilyn Black. He is survived by his wife Deb; his children, Lisa Stevens (Goldbach), Erin Woltz (Goldbach), Alex Goldbach, and Christopher Goldbach (Jessica); his grandchildren, Konnar and Lawrence; his sister Karlene Spivak (Ed); and his brother Jim Goldbach. His family will receive friends from 12-2 pm and 6-8 pm on Thursday, June 24, at SCHOEDINGER WORTHINGTON CHAPEL, 6699 N. High St., where a memorial service to celebrate his life will be held on Friday, June 25, at 11 am. In lieu of flowers, memorial contributions may be made to K9s for Warriors or Paws and Stripes. Please visit www.schoedinger.com to send messages of support to his family.

Larry Goldbach passed away on Friday, June 18, 2021. He was born on May 11, 1943, in Lakewood, Ohio, to Fred and Betty Goldbach. Larry grew up in Avon Lake, Ohio, with his three siblings. He loved the city of Cleveland and Lake Erie. He... View Obituary & Service Information

The family of Lawrence D. Goldbach created this Life Tributes page to make it easy to share your memories.

Send flowers to the Goldbach family.