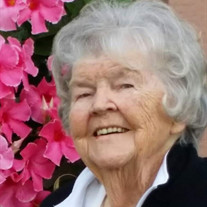 LaVern Coleman, age 97, passed away on Thursday, May 21, 2020 at her home in Johnstown, OH, with her loving family by her side. She was born on October 14, 1922 to Walter Patrick and Martha Magdalena Fay in San Pedro, CA. She graduated from San Pedro High School in 1941 and attended Pasadena Junior College. She worked for American Education Publications (My Weekly Reader) which became Xerox Corporation for 40 years before retiring and becoming “Grammie” and devoting her time and love to her extensive family. Her fondest memories were of marching in the Rose Bowl Parade as a teenager, great family vacations at Myrtle Beach, Christmas Eve gatherings, Buckeye football games and the winters she spent with her Arizona family. She is survived by her children Fay (Stephen) Warner of Zanesville, OH, Jackie Morgan of Dublin, OH, Walter Paul Coleman of Tucson, AZ, Ron (Carol) Coleman of LaGrange, KY, Mary Catherine (Richard) Hicks of Marana, AZ, and Laurie Coleman (Laurie Grivel) of Johnstown; grandchildren Robert (Erin) Warner II, Kelly (Melanie) Morgan, Stephanie (Brian) Stoflinsky, Charles Hathaway, Christina (Charles) Walters, Jace (Ellen) Coleman, Christopher (Krista) Coleman, Kendrick (Lauren) Coleman, Daniel (Nikki) Coleman, Matthew (Vanessa) Hicks, and Jared Hicks. She also leaves behind 23 great grandchildren and three great great grandchildren. She was preceded in death by her parents; sister Dorothy Jirosek; daughter Barbara Hathaway; granddaughter Amy Hathaway; and son-in-law Stephen Morgan. The family would like to extend heartfelt thanks to the nurses and doctors at OSU Hospital and are grateful for the kindness and care extended by the staff at Central Ohio Hospice and Schoedinger Funeral Service. Due to the current situation with COVID-19, there will be no calling hours. Inurnment will be at Maplewood Cemetery, New Albany. SCHOEDINGER NORTHEAST, Gahanna is assisting the family. In lieu of flowers, memorial contributions may be made to The Mid-Ohio Food Bank, or the charity of choice.

LaVern Coleman, age 97, passed away on Thursday, May 21, 2020 at her home in Johnstown, OH, with her loving family by her side. She was born on October 14, 1922 to Walter Patrick and Martha Magdalena Fay in San Pedro, CA. She graduated from... View Obituary & Service Information

The family of LaVern Coleman created this Life Tributes page to make it easy to share your memories.

Send flowers to the Coleman family.