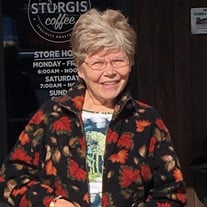 Laurean June Davis was born on June 5, 1948 in Dennison, Ohio to Curtis and Harrietta Kohler. She grew up as the oldest of five children working on the family dairy farm. At age 18 she moved to Columbus to study business while working at furniture stores and the Ohio State University. She started working at Upper Arlington High School in the attendance office before moving to the central board office as an administrative assistant to the Director of Business Services where she spent the remainder of her career. It was while working for the school district that Laurean made lifelong friendships and the high school librarian, Shirley Davis, introduced Laurean to her son, Ken Davis. She completed over 30 years with the Upper Arlington School District describing it as the best place to work. She retired in 2013. She spent her life actively involved in church. The family farm where she grew up was located down the lane from a small Moravian Church. While living in Upper Arlington, she read in the newspaper about a new Moravian church opening in Dublin, Ohio and she attended on their opening Sunday. She continued on to assist in setting up the Church of Redeemer Moravian Church where she and her family became active members. She enjoyed volunteering for various activities within the church and always felt that it was important to be involved with her daughters. She helped with the church youth group and attended many summer camps, as well as serving with the Friends of the Homeless. When her daughters were grown, she attended the Delaware Christian Church to be with them. She most currently attended the New Hope Church in Powell, Ohio. After retirement she enjoyed traveling and working in the garden and around her home. She loved to decorate and took great pride in making her house a home where her kids and grandkids could visit. Her grandkids were the absolute joy of her life. Spending time and taking care of her family was what mattered most to her. Laurean is preceded in death by her precious granddaughter, Hannah Elizabeth Wallace. Laurean is survived by her husband of 47 years, Ken Davis, her two daughters, Amy (Jeff) Wallace, Melissa (Levi) Oatney and eight of her grandchildren, Jonah, Makaylah, Micah, Isaiah and Gabrielah Wallace and Rachel, Aiden and Emily Oatney. Additionally, she is survived by her brother, Karl Kohler and three sisters, Susan (Richard) Hoy, Nancy Minard, and Connie (Mike) Kinsey and multiple nieces and nephews. Funeral arrangements are being handled by Schoedinger Northwest at 1740 Zollinger Road, Columbus, Ohio 43221. Family will receive friends on Sunday, December 12 from 2pm to 5pm where funeral service will be held at 10am Monday December 13.

Laurean June Davis was born on June 5, 1948 in Dennison, Ohio to Curtis and Harrietta Kohler. She grew up as the oldest of five children working on the family dairy farm. At age 18 she moved to Columbus to study business while working at furniture... View Obituary & Service Information

The family of Laurean J. Davis created this Life Tributes page to make it easy to share your memories.