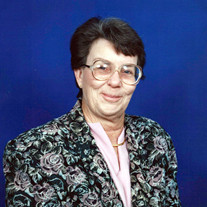 LoEtta (Chumbley) Killgore, 83, went home to be with the Lord on October 7, 2021, after a four-month illness. She went peacefully from her home in Dublin, Ohio, while in the company of her daughter and granddaughter. LoEtta was born in Canadian, Texas, to Tom and Doris (Flowers) Chumbley, on February 15, 1938, where she resided through high school and much of early adulthood. She played basketball, volleyball, and softball in her youth and graduated in 1956. She attended Wayland Baptist College, leaving early to pursue a beauty operator's license. LoEtta moved to Ajo, Arizona, in 1967, and, as well as raising her two girls, was a member of Ajo Heights Baptist Church, the Friday Friendship Club, Women of the Moose, Cowdens, Ajo Bowling, and even led a troop of Girl Scouts Cadettes for a time. She married Don Killgore in 1986 and joined him in gold prospecting and other rugged pursuits, and in his later years, was the wife of Santa C for two months a year. She loved taking photos of the sunsets wherever she happened to be, and the prettiest were taken at home on the Mogollon Rim near Payson. Daughter, Erika, brought LoEtta home to live in Dublin, Ohio, in 2012, where she became active at Linworth Baptist Church and served in AWANA and VBS, teaching kids the Good News of Jesus Christ. She also attended National Church Residence Champion senior center, where she made many good friends. In her free time, she would pick up the phone to check in on all manner of friends and family far and near, and she had a great listening ear and kind heart for them. She will be missed by many friends and family. She was preceded in death by her loving husband, Don; daughter, Kayley LaChele Burchfield Pino; parents, William and Doris Chumbley; brother and beloved sister-in-law, Tom and Reta Beth Chumbley; and faithful pup companion, Bonnie. LoEtta is survived by her daughter, Erika (Chris) Burchfield Marks of Dublin, Ohio; brother, Bill Chumbley of Canyon, Texas; grandchildren, David (Megan) Mesquita, Di'Ana (Gabriel) Olea, and Benjamin Pino of Ajo, James and Sarah Burchfield of Toledo, Ohio, and Laura Marks of Dublin; and thirteen great-grandchildren. She is also survived by nieces and nephews and several "bonus" grandchildren and their spouses and children. Arrangements entrusted to SCHOEDINGER DUBLIN. A memorial and scattering of ashes are being planned for next spring, when her grandchildren can attend.

LoEtta (Chumbley) Killgore, 83, went home to be with the Lord on October 7, 2021, after a four-month illness. She went peacefully from her home in Dublin, Ohio, while in the company of her daughter and granddaughter. LoEtta was born in Canadian,... View Obituary & Service Information

The family of Laura LoEtta Killgore created this Life Tributes page to make it easy to share your memories.

LoEtta (Chumbley) Killgore, 83, went home to be with the Lord...

Send flowers to the Killgore family.