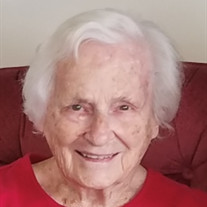 Laura Helen Wilson Davis passed away on February 11, 2021. She was 96 years old and lived outside of Chillicothe. A devoted and beloved matriarch, she was surrounded, always, by family. She was raised in a farmhouse full of siblings, and after graduating from Pickaway High School in 1942, she went on to raise a full farmhouse of her own. She cooked and sewed and taught her children and other children as a 4-H advisor. She had a passion for sports and for music: she studied violin and piano, gave piano lessons, and played piano for her church. Known for her kindness and cheer, she enjoyed working at the Kingston National Bank and spending time with her many friends. Helen was born on December 21, 1924 to Austin J. Wilson and Jessie M. Conaway Wilson, the sixth of seven children and the only daughter. She was preceded in death by her husband, Frank ("Tye") A. Davis; her parents; her brothers, Dr. Wells (Janet) Wilson, Paul (Ernestine) Wilson, Wayne (Doris Lee) Wilson, Philip (Nettie) Wilson, and Dr. George (Jean) Wilson; her daughter, Rebecca Sue Osborne; and grandsons, Joel Rice and Infant Rice. She is survived by her brother, Robert (Joan) Wilson; her daughters, Cindy (Dana) Thomas, Sally Kleon, and Nancy (Richard) Hinty; her son, Tye ("T.R.") (Kris) Davis; her son-in-law, Stephen L. Osborne; her grandchildren, Travis Rice, Andy (Sara) Rice, David (Kim) Thomas, Emily (Chris) Fox, Troy Thomas, Austin (Meghan) Kleon, Katy (Seamus) Brennan, Trey Davis, Todd Hinty, Matt (Laura) Hinty, and Nathan Stalnaker; her eleven great-grandchildren, and two great-great-grandchildren. A private visitation and service for immediate family and relatives only will be held Saturday, February 20 at Defenbaugh-Wise-Schoedinger Funeral Home in Circleville, Ohio. Visitation will start at noon, followed by the service at 1 p.m. A public graveside service will be held at Springbank Cemetery in Yellowbud, Ohio at 2 p.m. Please follow COVID protocol. The family plans to hold a summer memorial service when possible. Memorial contributions can be made to Union Township Fire Department.

Laura Helen Wilson Davis passed away on February 11, 2021. She was 96 years old and lived outside of Chillicothe. A devoted and beloved matriarch, she was surrounded, always, by family. She was raised in a farmhouse full of siblings, and after... View Obituary & Service Information

The family of Laura Helen Wilson Davis created this Life Tributes page to make it easy to share your memories.