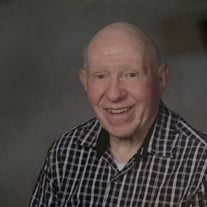 L. Richard Mowery, 84, passed into Heaven on November 22, 2021. He is preceded in death by his parents, Leonard and Martha Mowery and son-in-law Renold Williams. He graduated from North High School Class of 1955, and served in the United States... View Obituary & Service Information

The family of L. Richard Mowery created this Life Tributes page to make it easy to share your memories.