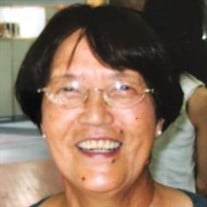 Kimi Merrill transitioned to the afterlife on December 17, 2020 at the Brown Memorial Home. She was born on January 1, 1932 in Sapporo, Japan in the Hokkaido Perfecture. She moved to the United States in 1958 when her husband was stationed at Lockbourne AFB and settled into Circleville. Kimi brought Japanese culture and cuisine to Circleville in the late 1950's before it was popular. Upon moving to Circleville, she could not speak or write English but would eventually become a well-known fixture at Tink's Restaurant where she and her two co-workers (Deanie and Esther) would famously serve and wait on generations of Circleville diners. Kimi was a devout Buddhist of the Nichiren sect Soka Gakkai and practiced the tenets of her religion every day; from twice-daily chanting to respect of others. She was an ally before it became acceptable. In addition to her religion, her family was the most important aspect of her life from attending sporting events to cooking their favorite Japanese dishes fried rice, sashimi, and sukiyaki. Kimi is survived by her daughter Margaret Lemaster (John Simison) of Ashville, Ohio and son Frank (Lisa) Merrill of Circleville, Ohio and grandsons Kyle (Rachel) Brown of Bremen, Ohio, Clayton Brown of Circleville, Ohio, John (Maggie Mancini) Merrill of Circleville, Ohio, Colin (Jessie Colburn) Merrill of Charlotte, NC and Trey Merrill of Fort Rucker, AL. She is also survived by her brother Tetsuo Umehera of Sapporo, Japan and special niece Yuri (Michio, Yuki, and Yuka) Akimoto of Tokyo, Japan. She is also survived by great-grandchildren Emily and Ezra and special friend Cindy (Rick) Wood and Austin and Adam Wood. She is preceded in death by her husband Leslie Merrill, father Shotaro Umehara, mother Koto Kobayashi and several brothers and sisters. At the family's request, there will be no visitation hours but a private Buddhist burial celebration will be performed on December 27, 2020 at the Defenbaugh-Wise-Schoedinger Home. The family requests memorial donations be directed to Soka Gakkai International-USA (www.sgi-usa.org) or the Ohio Health Hospice - Circleville Office (610 Northridge Rd). The family would like to thank the staff at Brown Memorial Home and Ohio Health Hospice for providing care and comfort to Kimi over the past several months. As Kimi always told us "Ganbatte!" (always do your best).

Kimi Merrill transitioned to the afterlife on December 17, 2020 at the Brown Memorial Home. She was born on January 1, 1932 in Sapporo, Japan in the Hokkaido Perfecture. She moved to the United States in 1958 when her husband was stationed at... View Obituary & Service Information

The family of Kimi Merrill created this Life Tributes page to make it easy to share your memories.

Kimi Merrill transitioned to the afterlife on December 17, 2020...

Send flowers to the Merrill family.