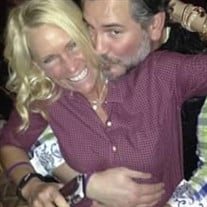 In honor and memory of Kimberly Weiss Whybrew A celebration of the inspiring life of Kim Whybrew, 51, of Westerville, will be held from 2:00pm to 4:30pm on Thursday August 5th at Schoedinger Dublin Funeral Home, 5980 Perimeter Dr in Dublin, OH. To think of Kim is to think of Beauty, Grace, Strength, Courage and Love. Kim was born in Bay Village, Ohio on October 4, 1969, to her loving parents Paul and Anne Weiss, and big brother Ken. Growing up, Kim had lots of friends and many cherished memories. In high school, she was a member of the Bay Rockettes drill team and was the favorite babysitter of many area families. In 1988, Kim went to Bowling Green State University where she studied Psychology. It is also where she met her husband of 25 years, Paul Whybrew. After graduating, Paul and Kim were married on September 10, 1994, and eventually moved to Westerville, Ohio to start their family. She has two beautiful children, Gwyneth, age 21 and Baylor, age 18. Kim was a selfless person. She rarely talked about herself but was always quick to ask how you were doing and she listened in such a way that each person felt really seen and heard. She would remember those conversations and always check back in with people about them. She cared deeply for so many people and actively showed it in her attention to them and their lives. The great loves in her life were Paul, Gwyneth, and Baylor. They were fortunate enough to have traveled many places together as a family and they created a lifetime of memories that will be cherished. Kim fought fiercely to the bitter end to stay for Gwynnie and Baylor. She loved them so much and her presence will always be with them. Kim and Paul were so in love with one another, kind and caring to each other, and yet had so much fun together. They could joke and enjoy making fun of each other because it was based on a deep foundation of love and respect. Although Paul may have been the life of the party, Kim was always at his side throwing in hilarious one-liners when you least expected it. She had a great sense of humor and loved nothing more than to laugh and enjoy life. We all celebrate they are reunited again. Because of Kim's external beauty and soft-spoken voice, it would have been easy to see her as a fragile person, but that would have been far off from the truth. Kim waged a fierce, 7-year battle with pancreatic cancer. She showed incredible courage, strength, and dignity throughout. Yet she remained more concerned about others than herself, even in her last days. Kim was and will remain such an inspiration to so many. Kim is survived by her children, Gwyneth Whybrew and Baylor Whybrew, parents, Paul and Anne Weiss, her brother Ken (Dawn) Weiss, her in laws, Lyndon and Mary Whybrew, sister-in-law Sarah Whybrew, her brother in law, Jonathan (Nancy) Whybrew and her nieces and nephews, Ashley Whybrew, Emma Bowling, Maddie Hickey, Kelsey Whybrew, Sydney Whybrew, Aidan Weiss, and Brandon Weiss. The family would especially like to thank the numerous friends of Paul and Kim who helped significantly in the care of Kim, especially in this past year. You were such a blessing to Kim and to us. In lieu of flowers, donations may be made to established 529 college plans in the names of Gwyneth or Baylor. Checks can be sent to: Merrill/Bank of America, "Sprenkle Wealth Management Group" at 312 Walnut St, Ste 2425, Cincinnati, OH 45202. On the check's memo line, please indicate "Gwyneth 529" or "Baylor 529", as applicable.

In honor and memory of Kimberly Weiss Whybrew A celebration of the inspiring life of Kim Whybrew, 51, of Westerville, will be held from 2:00pm to 4:30pm on Thursday August 5th at Schoedinger Dublin Funeral Home, 5980 Perimeter Dr in Dublin,... View Obituary & Service Information

The family of Kimberly Whybrew created this Life Tributes page to make it easy to share your memories.

In honor and memory of Kimberly Weiss Whybrew
A celebration of...

Send flowers to the Whybrew family.