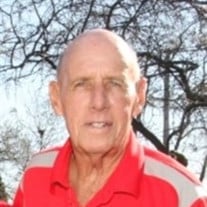 Kent Allen Tarrier, 91, passed away March 4th, 2021, in Bonita Springs Florida. He was born on August 24, 1929 in Columbus, Ohio to Fred and Ruth Tarrier, and spent his early life there, eventually attending The Ohio State University. In his later years, Kent split his time between Vermilion, Ohio and North Captiva, Florida, leaving for Florida as soon as his beloved Ohio State Buckeyes finished their last football game of the season. An avid Buckeye fan, Kent didn't miss a home game for over 35 years. He served in the U.S. Army and was the owner of The Tarrier Steel Company, where he worked for over 50 years before retiring in 1992. Kent was preceded in death by his parents, Fred and Ruth Tarrier, his first wife, Ann (nee Hood) Tarrier, his siblings, Kirk and Ann, and his daughter-in-law Libby Tarrier. He is survived by his wife of 23 years, Carol (nee Caple) Tarrier, his children; Todd (Mary Anne) Tarrier, Tenlee (Larry Robinson) Tarrier, Tim Tarrier, and Tina (Joe) Muscarella; his grandchildren, Caroline Degg, Ben Tarrier, Chloe Tarrier Truitt, T Jordan Tarrier, Avery Hasson, Andrew Tarrier, and Annie Muscarella, and their spouses, and 5 great grandchildren. Always hard-working and motivated, Kent lived an active life and enjoyed spending time by the water. He will be remembered by all who knew him for his spunk and humor, especially his quick wit. A celebration of his life will be held later this year. In lieu of flowers, the family suggests memorial contributions be made to either the Bexley Education Fund, the Buckeye club at OSU, the Upper Captiva Civic Association, or Main Street Vermilion.

Kent Allen Tarrier, 91, passed away March 4th, 2021, in Bonita Springs Florida. He was born on August 24, 1929 in Columbus, Ohio to Fred and Ruth Tarrier, and spent his early life there, eventually attending The Ohio State University. In his... View Obituary & Service Information

The family of Kent Allen Tarrier created this Life Tributes page to make it easy to share your memories.

Send flowers to the Tarrier family.