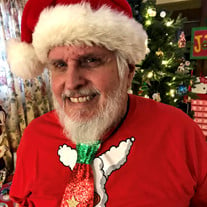 Karl Moe, 66 years young, passed away on Friday January 15th, 2021 at Mt. Carmel hospital in Grove City, Ohio from a battle with COVID. He is preceded in death by his parents Alfred and Donna (Forsberg) Moe, and his sister Karen Moe. Karl is survived by his siblings, Thomas Moe (Christine) and Greta Labus (Eugene), his loving wife of 17 years; Ravanna Moe, their children; Ryan (Mindy), Adrion, and foster daughter Crystal Courvier, and the grandchildren; Alexander, Mia, Jonah, and Jack. He also leaves behind beloved nieces, nephews, and a host of friends. Karl loved God and his church, The St. John's Lutheran Church of Grove City, Ohio and was an active member. He was a Sunday school teacher, a member of the choir where he sang with the Columbus Symphony and was a member of St. John's Promise Keepers. He won several honorable mentions in Trunk or Treat decorations and church chili cook-offs. He never won 1st prize in the chili event, but he promised to sue for a recount. Karl was a great comforter to his family and friends. He radiated friendship and leisure time. He represented the best qualities of Saint Joseph, not just his hard work and devotion to family but his courage to adopt and keep people as his family and then never let them go. Unlike much of the world he never grew cynical or melancholy. In his last days he was every bit the optimistic Eagle Scout he had been as a boy. His peers were fond of him in his customer service job and when time permitted, they conspired and made plans to get together and go off on adventures when it became safe to do so. He was always proud to be an alumnus of Capital University and religiously watched all their football games. The successes of his classmates were always a shared accomplishment he felt and always spoke well of them and wished them the best in life. He worked for the State of Ohio for 25 years as the Assistant Auditor of State. His favorite job was being a Santa Claus whenever possible and worked for Fleshman Photography. If he could have flown around the world to deliver gifts and make every kid happy that's all he would have ever done in his spare time. Christmas was always his favorite holiday, but he was no slouch around Halloween either. Karl enjoyed being able to work on his six-acre farm raising goats and berries. He loved being busy and was never going to run out of new projects to start and a thousand and one projects to finish. It may actually be a challenge for heaven to keep him busy as he gets into everything. You know, reducing the retirement age for social security might be a really good idea the next time a disease or a pandemic breaks out. Were Karl still with us he'd advocate for an easier and safer life for all.

Karl Moe, 66 years young, passed away on Friday January 15th, 2021 at Mt. Carmel hospital in Grove City, Ohio from a battle with COVID. He is preceded in death by his parents Alfred and Donna (Forsberg) Moe, and his sister Karen Moe. Karl is... View Obituary & Service Information

The family of Karl Moe created this Life Tributes page to make it easy to share your memories.

Send flowers to the Moe family.