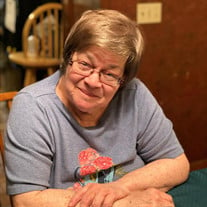 It is with immense sadness that the Murray Family reports the loss of a wife, mother, grandmother, sister and aunt, Karen Lee Murray, who unexpectedly left this world in the early morning of Wednesday, May 5, 2021. She was born October 20, 1947 to Geraldine R. (Crease) and Capt. Richard P. Frayer. Karen lived a full 73 years. She was a member and Worthy Advisor of Job's Daughters and a graduate of the 1965 class of Eastlake North High School. She married her high-school sweetheart, Dick Murray, in 1967 and was honored with three sons, Bob, Rick and Bill. She was later blessed with a loving daughter-in-law, Melia, two beautiful granddaughters, Jordan and Kira, an amazing grandson, Jacob. Sadly, she was unable to witness the birth of her newest grandchild later in 2021. Karen was also graced with two sisters, Sue Jensen and Lori Frayer. Karen's first, second and third priorities were always her family, and she was very involved in their lives. She served actively in PTA, and when her children were old enough, served as Cub Scout Den Mother for each. While living in Concord Township, Karen hosted many parties every year, and the Murray house was frequently booming with birthday parties and seasonal holiday celebrations. She always seemed to have a bursting houseful of neighborhood kids and relatives both inside and out in their large back yard. The family moved to Worthington Ohio in 1983, and as all of her sons were out of elementary school, Karen went back to work as an Administrative Assistant for Blazer and Associates, and later spent 15 years as an Office Manager for N.W. McCleary with RJ Reynolds Tobacco Company. After she and Dick retired from their respective jobs in 2000, they ventured into retail business and opened a cigar and tobacco shop called Smoke Signals, which they owned and operated until 2010. Karen became a grandmother in December 2000 with the birth of her granddaughter Jordan, followed in August 2002 by her grandson, Jacob. Years later, she was blessed by her third grandchild, Kira, in September 2019. While Karen loved being a wife and mother, she loved being a grandmother even more. She had a strong relationship with her own grandmother that set a high bar for her, but she truly bloomed as a grandmother. She also loved to cook. She was a true matriarch and at the center of every birthday and holiday celebration at the Murray home, and planned and prepared every Thanksgiving, Christmas and New Year's Day celebrations. She baked rabbit-shaped cakes and colored eggs for each member of her family every Easter, and made a host of different cookies and popcorn-and-cranberry garlands every Christmas. Through her interminable strength of will, she kept her family close to her and close to each other. And, there was never a time when friends of the family were ever turned away or were not welcomed in as members of her family. Karen was the embodiment of Family and she served her family well every day she was alive. She was deeply loved by all, and her family will miss her greatly. Karen was preceded in death by her mother, Geraldine (Crease) Frayer and her father, Capt. Richard P. Frayer. She is survived by her husband, Dick Murray; her sons, Bob, Rick and Bill, her daughter-in-law Melia; her beautiful grandchildren, Jordan, Jake, and Kira; her sisters, Susan and Lori, and many nieces and nephews that know her as Aunt Karen. Family will receive friends on Tuesday, May 11, 2021 from 6pm-8pm at SCHOEDINGER WORTHINGTON, 6699 N. High Street, Worthington, OHIO 43085, where a Funeral Service will be held the following day on Wednesday, May 12, 2021 at 11am, Pastor John Girard officiating. A livestream of the Funeral Service will be available on this page come Wednesday morning.

It is with immense sadness that the Murray Family reports the loss of a wife, mother, grandmother, sister and aunt, Karen Lee Murray, who unexpectedly left this world in the early morning of Wednesday, May 5, 2021. She was born October 20, 1947... View Obituary & Service Information

The family of Karen Murray created this Life Tributes page to make it easy to share your memories.

It is with immense sadness that the Murray Family reports the...

Send flowers to the Murray family.