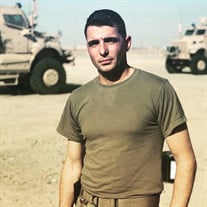 Sergeant Justin Ryan Keyser came into this world on March 23, 1984 in pure Justin fashion, 4 minutes before his twin brother, Jason − he was always early, never late. Justin grew up in Pataskala, Ohio, and his father, Jeffrey Keyser, raised his boys to embrace their curiosity and passions. As a child, his interests included skateboarding, playing sports, hanging out at the drag racing strip and playing punk rock music on the drums. After high school, Justin had the opportunity to work at Paisley's Rental, where he was able to utilize his uncanny knowledge of tools and love for working with his hands. Justin was full of ambition and confidence, which led him to pursue a career with New York Life Insurance, where he opened his own agency. Justin loved being able to use his knowledge of finances to help others and continued this passion as a Chase private client banker. Ultimately, his banking career brought him back to his twin brother, Jason, where they both worked at Mutual of Omaha as mortgage bankers. While he always joked about his "banker body" experience, his ultimate calling was to follow his patriotic duty and enlist as a soldier in the Army. He joined the army later in life than most and was often referred to as "Old Man Keyser" amongst his comrades. Sgt. Justin Keyser served in the Ohio Army National Guard as a Scout in the 1-145th Armored Regiment. He recently returned home in October, after a 14-month deployment to Kuwait and Saudi Arabia in support of Operation Spartan Shield. He was extremely proud of his accomplishments as a senior gunner and raven operator. While it was extremely difficult being away from home, the bond he created with his Army family meant so much to him. Justin was eager to return home so he could be reunited with the love of his life, Elizabeth Keyser, and continue the adventurous life ahead of them. While they had only been married a short time before the deployment, they had already shared so many memories together doing things they both loved. Justin and Elizabeth loved going on camping adventures in the camper they renovated, taking weekend fishing trips, hiking in the mountains, playing with their beloved Golden Retriever, Scout, and most recently, being out on the water with his new boat. Justin's love for the outdoors began early in life as his grandparents, Richard and Barbara Keyser would often take him camping. As an avid outdoorsman, that is where he found some of the greatest joys and memories throughout his life. If there was a body of water, Justin would find a way to find fish. From fishing the Licking River to catching redfish in the Gulf, Justin loved the challenge of catching as many species of fish as possible. Being a twin meant Justin was blessed to always have his brother, Jason, by his side and their bond is one that many will never fully understand. Justin also loved being an older brother to his other siblings and uncle to his nieces and nephews. Justin was someone who would do anything for the ones he loved. On February 4th, 2021, Justin peacefully passed away at home, surrounded by his wife and brothers. Upon his return home from deployment, he received a stage 4 cancer diagnosis, and during that battle, he fought with insurmountable strength and dignity. Thank you to the amazing and caring medical team at The James Cancer Hospital as well as the staff of Hospice of Central Ohio. Justin was preceded in death by his grandfather, Richard Keyser, whom he always admired and looked up to as a child. He is survived by his father, Jeffrey Keyser; mother, Cheryl Kinsey; and wife, Elizabeth Keyser. He is also survived by his grandmother, Barbara Keyser; brothers, Jason, Jared, and Christopher; sisters, Sarah, Lauren, Michelle, and Jessica; sisters-in-law, Kate and Kelly; brother-in-law, Karl; and nieces and nephews, Violet, Benjamin Ryan, Elliot, Georgia, Aeyla, Aubrey, Elijah and Noah. Family will receive friends on Tuesday, February 9th from 5-8pm at Schoedinger Northeast Funeral Home, 1051 E. Johnstown Rd. Gahanna, OH 43230. and a funeral service with full military honors will be held the following morning, Wednesday, February 10th at 11am. Masks are required for all attendees. A live webcast of the funeral service will also be available at https://webcasts.lifetributes.com/1119398. In lieu of flowers, please consider a donation to the Fisher House Foundation (www.fisherhouse.org).

The family of Justin Keyser created this Life Tributes page to make it easy to share your memories.

Sergeant Justin Ryan Keyser came into this world on March 23,...

Send flowers to the Keyser family.