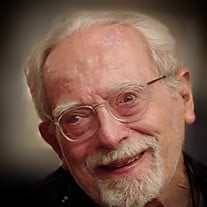 Gyúla (Julius) Joseph Nemeth was born on December 14th, 1938 in Kecskemét, Hungary to Dr. Gyúla (Julius) Nemeth and Ildikó Juliánna (Muraközy) Nemeth. He died on September 16th, 2020 at his home in Columbus, Ohio. Julius immigrated to the United States in 1949 with his parents and younger brother after fleeing from Hungary in 1945 to a U.S. occupied zone in Germany. His family first settled in Utica, New York and later moved to Youngstown, Ohio. He became a naturalized citizen of the United States on May 10th, 1956, adopting his Americanized name. Julius attended Syracuse University, graduated with a B.A. from Youngstown State University and a J.D. from Georgetown University Law School, and started his law career working as a law clerk for the U.S. 7th District Court of Appeals. On July 29th, 1967, he married Mary Helen Mueller. Shortly afterward, Julius and Mary moved from Youngstown to Columbus, Ohio, and became members of Holy Trinity Lutheran Church. After he was married, Julius worked as an Assistant Attorney General for William B. Saxbe, then Attorney General for the State of Ohio. During that time, Julius and his colleagues took a case to the United States Supreme Court. He was appointed to the Ohio Constitutional Revision Commission by Governor James Rhodes. In 1974, he was recognized as a distinguished citizen of the State of Ohio in Who's Who in Ohio. He finished his law career with an appointment as a Magistrate of the Franklin County Municipal Court. Although he had a distinguished law career, Julius will be remembered most fondly by all as a kind, generous, gentle and loving man and as a devoted and proud husband, father, and grandfather. He is survived by his beloved wife, Mary; his three children, Theodore (Ted) Julius Joseph (Sara Seidel) Nemeth, Julianna Maria (Aaron Saling) Nemeth, and Andrew Thomas (Christy) Nemeth; eight grandchildren, Emerson Gyúla Saling, Marley Macallister Nemeth, Jonas András Saling, Matthias Theodore Nemeth, Ashton Edward Saling, Arianna Ildiko Nemeth, Calder Casey Nemeth, and Luca Julius Nemeth; and many adored nieces, nephews, and extended family members. He was preceded in death by his parents and brother Attillá (Alexander) Nemeth. Julius spoke fondly of Hungary, and Hungarian cultural values and traditions were celebrated within the family. Julius was also deeply grateful for his American citizenship and all the opportunities the United States afforded him to live a full and happy life. This was especially evident to Julius when he and Mary travelled to Hungary shortly after the collapse of communism. He loved America with all his heart but was saddened by the increasing polarization in U.S. politics, particularly regarding the treatment of immigrants and refugees, and the politicization of fundamental human rights. Julius was welcoming, kind to all he met, and most looked forward to gatherings with family and close friends. He enjoyed listening to classical music, tinkering with short wave radios, reading about classic cars, and loving his dogs. He also enjoyed travelling throughout the United States and Canada-to national parks, to Toronto to visit Hungarian relatives, and to the Outer Banks of North Carolina. In lieu of flowers, donations may be made to the Memory Garden of Holy Trinity Lutheran Church of Upper Arlington (“Please join Julius’s family for a livestream funeral service at 9:45am on Saturday September 26, 2020 at engagedbygrace.org/livestream . The livestream will start around 9:30am. All are invited to a celebration of life memorial concert and party to be held when it is safe to gather again. Tentatively this event is scheduled for December 2021.”

The family of Julius Nemeth created this Life Tributes page to make it easy to share your memories.

Send flowers to the Nemeth family.