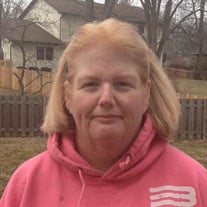 Julia “Julie” Margaret Rush (née Clouse), age 58, passed away peacefully on Thursday, December 10, 2020 at Hospice of Central Ohio (OSU). She was born April 18, 1962 in Columbus, Ohio to the late Thomas and Mildred Clouse. She was also preceded in death by her Father and Mother-in-law, Ron and La’Von Rush. She is survived by her husband, Michael Rush; son, Craig Rush; and daughter, Jennifer Rush. In addition, she is survived by her Uncle John (Anna Mae) Shook; cousins, Tom (Terry) Shook, Vicki (Steve) Blubaugh, Tracy (Sue) Shook, Karen Clouse, and Kathy Clouse; among others, brother-in-law Mark (Dee) Rush; along with many second cousins (her ‘nieces and nephews’) Chris (Lisa) Shook, Tim Shook, Cody (Laken) Shook, Katie (Jared) Bloom, Kara Blubaugh, Peter Blubaugh, and Nate Blubaugh; and by Michael’s Aunt Karen Rush-Jones and her son Morgan and Mike’s Uncle Quint (Natalie) Cooley and their children. Julie graduated from Brookhaven High School (class of 1980) and graduated from Bowling Green State University with a Bachelor of Science in Nursing (class of 1985). She went on to gain accreditation as a registered nurse (RN) and perioperative nurse (CNOR). She then pursued her lifelong passion as an operating room nurse for both the Ohio Health and Mount Carmel hospital systems in Columbus, along with several years working with Dr. Aziz’s plastic surgery practice. She later became more involved administratively, including continuing medical education and personnel management in her role as Nurse Operating Room Director at St. Ann’s Hospital. Her primary focus was always on patient well-being and she took great joy and pride in helping others. A life-long dog person she always enjoyed the company of one of the family’s golden retrievers (Riley who was preceded by Frisky, Holly, Heidi, Sam, and Mandi). She also enjoyed family vacations to Florida where she would spend countless hours soaking up the rays on the beach, and tolerating Mike’s *expletive deleted* fishing excursions. In addition, she enjoyed trips to Buckeye Lake with her in-laws. Most of all, she enjoyed spending time with her family. Born a Buckeye fan, autumns were a sacred time of watching OSU football with friends and family. She always enjoyed watching OSU play in the rivalry games against ‘that team up north’ and was ecstatic to see them win national championships in recent years. A Lutheran her whole life, Julie attended services and was a member of congregations at St. Mark’s Lutheran Church (where she was married), North Community Lutheran Church, and currently Clinton Heights Lutheran Church. As a lifelong health care worker, Julie would not want anyone to become ill on her behalf. Therefore, a celebration of life will be planned by the family once it is determined that doing so will be safe for all in attendance, at a later date. In lieu of flowers, contributions may be made to the American Stroke Association (a division of the American Heart Association) or to Hospice of Central Ohio. Schoedinger North is honored to serve Julie’s family.

The family of Julie Rush created this Life Tributes page to make it easy to share your memories.

Send flowers to the Rush family.