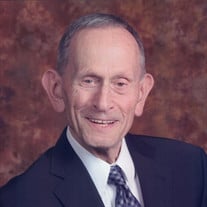 Julian "Jeff" E. Forney, 89, of New Albany, Ohio, passed away Wednesday, September 8, 2021. He was born in Cincinnati, Ohio on March 28, 1932 to the late Ferdinand "Fred" Forney and Lucille (nee Jones). He graduated from Western Hills High School and Otterbein University. He served in the US Army in Korea. Jeff retired from the Auditor of the State of Ohio after 24 years of service. In retirement, he worked as a freelance floral designer. He was passionate about creating arrangements for his friends and family. He was an avid opera lover and enjoyed attending opera performances, especially in Cincinnati and at the MET. He loved participating with the Art in Bloom at the Columbus Museum of Art, going to Penn State football games, and going to the cabin in Cross Fork, PA. He was a member of Trinity Evangelical Lutheran Church in downtown Columbus. In addition to his parents, he is preceded in death by his beloved aunt, Mathilde Forney. He leaves behind his longtime partner, Kenneth Fultz; cousin Sylvia Lack of Cincinnati, Ken's sisters, Kathryn (Bill) Gingerich and Susan (John) Weaver; Jeff's half-sister Denise Davis, friends at the Summit Chase in Grandview where he lived for many years, and many other friends and relatives. Visitation will be held Friday, September 17, 2021 at SCHOEDINGER NORTHEAST FUNERAL HOME, 1051 E. Johnstown Rd., Gahanna, from 5pm to 7pm and Saturday, September 18 at Trinity Evangelical Lutheran Church, 404 S. Third St., Columbus, from 10am to 11am. A Funeral Service will follow at 11am, with a reception to follow in the church fellowship hall. Interment will take place Monday, September 20, at St. Joseph Cemetery, 4500 Foley Rd., Cincinnati, at 11am. Donations may be made in Jeff's name to the Columbus Museum of Art and Trinity Evangelical Lutheran Church.

The family of Julian Jeff Forney created this Life Tributes page to make it easy to share your memories.

Send flowers to the Forney family.