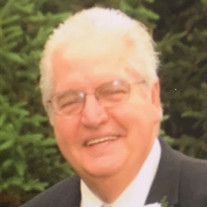 Judson Carl Boley, 74, grandfather, father, husband, brother, uncle, coach, teammate, friend and card shark went to reunite with loved ones in heaven on Sunday, January 9, 2022. He was born April 14, 1947, in Columbus, Ohio. He was preceded in death by his parents Judson Curtis and Ruth (Spoerl) Boley, his beloved sister Judy and brother-in-law Ron Smith. "Jud" is survived by his former spouse, Cheryl Boley and their children Elizabeth Paczak (Andrew), Judson Cook Boley (Kandice), and Sarah Sandrock (Paul); grandchildren Chase, Brynn, Addison, Emma, Aubrey, Garrett, Judson Cameron, and Owen; spouse Sheryl Boley; brothers John (Karen) and Jeff (Rhonda) Boley; and a close, extended family of in-laws, nieces and nephews. He was an avid sports-lover and dedicated fan of The Ohio State Buckeyes and the Cleveland Browns. Cheers for a Buckeyes Rose Bowl win before his passing and a Browns over Bengals win the day of. He played baseball and basketball for Whetstone High School, basketball for Bowling Green State University and softball professionally. He had an even greater passion for coaching, caring for players as his own, and cheering for his kids and grandkids in sports and their many other activities. He was a proud veteran of the United States Army and we will be forever grateful for the amazing staff and medical care received from the Columbus VA Medical Center. He was as charismatic as they come, a born salesman, competitive, hilarious and opinionated. He was loved by most, except sports officials. He was fighting to get back to those sidelines and now he is watching from the best seats. Visitation will be held at Schoedinger Northeast, 1051 E. Johnstown Rd, Gahanna on Thursday, January 13, from 4-6pm followed by a brief service beginning at 6pm. In lieu of flowers, please consider a donation to the Columbus VA to support fellow Veterans at https://www.pay.gov/public/form/entry/101/48003168/. To donate by check, make check payable to the VA Central Ohio Healthcare System: General Post Fund with "In Memory of Jud Boley" in the memo, 420 North James Road, Columbus, OH, 43219 Attn: Volunteer Services.

The family of Judson Carl Boley created this Life Tributes page to make it easy to share your memories.

Send flowers to the Boley family.