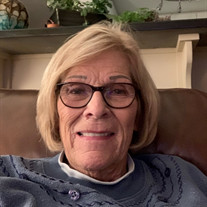 Judith Lee (Hart) Fagan-Haas, 74, passed away on December 14, 2021. She was born on December 21, 1946 to Leeland and Alice (Morgan) Hart in Wooster, OH. After high school, Judy would go onto study at Louisiana Tech and work for many years for George and Doug Kreiger (Kreiger Ford) as Doug's secretary. It was there that she met the love of her life, Bill, through his role in auto advertising with the Columbus Dispatch. They were married on June 2, 1976, and enjoyed many loving years together until his passing in 1997. Judy would remarry David Michael "Big Mike" Haas in 2004, and would happily spend 10 years with him, until Mike's death in 2014. Judy's pride and joy in life were her kids, her grandkids, and anything they were involved with. She always attended their club events, any sports, and band shows. In her free time, she enjoyed going to the pool in her condo community, Woods at Shagbark. Judy looked forward to talking with close friends and neighbors on her porch. She frequently visited Amish Country in Berlin, OH, or her hometown of Wooster. If she wasn't home in Ohio, she was home on the beach in Florida, watching beautiful sunsets. Judy was a talented seamstress and was in process of making outfits for her granddaughters when she passed. She was also known for her beautiful stained-glass art, her "Gaga bows" for her granddaughters, and for her basket weaving. Judy was an easy person to talk to as she loved to socialize with just about anybody. She cared deeply for the ones closest to her. Judy maintained a Christmas tradition from her family, The Christmas morning coffee cake whom she carried on from her Mother Alice. Due to demand, she often made well over 100 coffee cakes for just about anyone who asked. It was not uncommon for Judy to put others needs before her own. She was selfless, caring, loving, and sometimes sassy. Judy is preceded in passing by her parents, Alice and Leeland Hart; and youngest brother Jim Hart, as well as loving husband of 21 years, Bill Fagan, and Michael Haas, with whom she spent 10 happy years. Left to cherish her memory are her sons, Patrick Fagan (Norah Fagan) of Galena, OH and Mike Fagan (Zack Roybal) Grove City, OH; grandchildren Abi, Clare, Liam, and Owen; her brother Jack Hart (Laurel Hart) of Blufton, SC; nieces Katie Ventura-Hart (Kyrstyn Ventura-Hart) of Bozeman, MT, Mimi Haan of Indianapolis, IN, and Mindy Webster Sattele of Hudson, OH; and nephew Bryan Hart (Emma Marie Rucker) (Dawsonville, GA); her sister-in-law Anita Hart; her step daughter Colleene Weiser (Todd Weiser) and their son Rex Weiser; step daughter Kathy Clark (Tim Clark) and Tims's daughter, Erin Clark. She is also survived by many dear members of the Haas Family. Visitation will take place on Sunday, December 19, 2021 from 4pm-7pm at SCHOEDINGER NORTHEAST, 1051 East Johnstown Road, Gahanna, OH 43230. A Mass of Christian Burial will take place on Monday, December 20, 2021 at 10am at St. Mary Catholic Church, 5684 Groveport Road, Groveport, OH. Inurnment will follow at St. Joseph Cemetery in Lockbourne, OH. In lieu of flowers, please make contributions in Judy's memory to her grandbabies' school, St. Mary School Delaware, 66 E. William St. Delaware, OH 43015.

Judith Lee (Hart) Fagan-Haas, 74, passed away on December 14, 2021. She was born on December 21, 1946 to Leeland and Alice (Morgan) Hart in Wooster, OH. After high school, Judy would go onto study at Louisiana Tech and work for many years for... View Obituary & Service Information

The family of Judith Lee Hart Fagan-Haas created this Life Tributes page to make it easy to share your memories.

Send flowers to the Haas family.