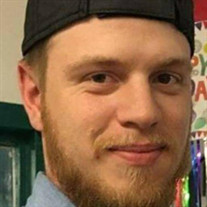 Joshua Wolfe, age 31, of Pleasantville passed away on June 15, 2021. Josh was born October 24, 1989, in Columbus, Ohio. He is survived by his mother Melissa Wolfe, grandmother Theresa Hill, aunt Michelle Hill, siblings Tyler Wolfe and Jacob Wolfe, his daughter Emma Wolfe, and nieces Paisley Wolfe and Lilyana Lawyer. Josh was preceded in death by his grandfather Chet Hill, uncle Monte Hill, and grandmother Marie Fyffe. Josh had many friends who had a special place in his heart: Bristol, Billy, Brian, Matt, Joanie, Holly, Cody, James, Jordan, Mollie and so many others. Josh will be remembered for his smile, his laugh, and his jokes. He could make a bad day into a good one. He would give anything to anyone. He knew no stranger and he would take everyone in with open arms. His kind heart and soul have left imprints on so many hearts and he will forever be missed.

The family of Joshua Wolfe created this Life Tributes page to make it easy to share your memories.

Send flowers to the Wolfe family.