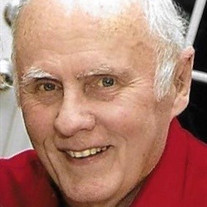 Joseph William (Bill) Robbins, Jr. of Gahanna Ohio went to be with our Heavenly Father on October 19, 2021, five days after his 82nd birthday. Bill was born in Marion, Ohio on October 14, 1939. He is survived by his loving wife of sixty-two years, Claire Ruth Robbins. His legacy will live on through their five children, Eric (Kristi) Robbins, Leslie (Michael) Etheridge, Stephen (Diana) Robbins, Linda (Kevin) Walsh, and Matthew Robbins. Bill was the proud grandpa of twelve grandchildren and four great grandchildren. He was the oldest of ten loving siblings and a lifelong friend to many. He was preceded in death by his father Joseph William Robbins, mother Helen Robbins Paratore, step-father Jim Paratore, and sister Judi Robbins Olsen. Bill was a long time well-respected member of New Life Church in Gahanna, Ohio, where he served as an Elder and Director of Marriage and Parenting. Bill and Claire co-founded Baptist Marriage Encounter and served for twenty years. Bill had a passion for helping couples develop healthy, God-centered marriages. He led by example in his unwavering faith impacting many lives through his wisdom and guidance. Bill will be remembered as an intelligent, kind, and gentle man with a quick sense of humor. In his youth, he was athletic and competitive in sports. As he grew older, he continued to enjoy following sports and was the number one fan of his grandchildrens' teams. Bill was an avid reader and lifelong learner. He enjoyed fishing, music, and travel. Bill treasured time with his family during annual summer vacations at Lakeside Chautauqua. The memories made there will always hold a special place in our hearts. We find comfort in knowing that Bill is enjoying glory in the presence of his Savior. Memorial Service will be held on October 23, 2021 at 3pm with calling hours before, from 1-3 at New Life Church 3690 Stygler Rd.. Gahanna

Joseph William (Bill) Robbins, Jr. of Gahanna Ohio went to be with our Heavenly Father on October 19, 2021, five days after his 82nd birthday. Bill was born in Marion, Ohio on October 14, 1939. He is survived by his loving wife of sixty-two... View Obituary & Service Information

The family of Joseph "Bill" Robbins created this Life Tributes page to make it easy to share your memories.

Send flowers to the Robbins family.