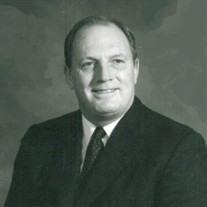 Joseph "Joe" Paul Jester, age 89, of Powell, Ohio, passed away peacefully on April 13, 2021. Joe was born February 6, 1932 in Columbus, Ohio to the late Joseph Jester Sr. and Elsie (Hill) Jester. He is survived by his wife of 60 years, Miriam "Mim" Louise (Foster), children Todd (Toni), Chad (Debbie), Brad (Melissa) and grandson's Tyler, Trent, Camden, and Kellen; sisters Joyce Dring and family of Cincinnati, Ohio, and Karen (Norm( DeLong and family of Richmond, Virginia. Preceded in death by brother-in-law Ken Dring. Joe was a graduate of Columbus North High School (1950) where he excelled in track and field and received All-City recognition in football. He was always proud to be called a "Polar Bear". Joe graduated from The Ohio State University with a B.S. Business Administration degree (1954). He was a member of the Kappa Sigma Fraternity. Joe joined the Navel ROTC program and was appointed a commissioned officer United States Marine Corps upon graduation. Joe was stationed in Japan during his active duty and later concluded his service as a Captain in the Marine Corps Reserve. Joe was very proud to have served his country. Following the military, Joe joined ATandT where he spent a 35 year career in numerous management positions in Dayton, Springfield, and Columbus. Following his retirement from ATandT, he joined Capital University as Special Assistant to the President. Joe was dedicated to the community through volunteer service on numerous civic and nonprofit boards including: The Ohio Foundation of Independent Colleges (OFIC), Columbus Association for the Performing Arts (CAPA), Franklin County Convention Facilities Authority, Greater Columbus Convention and Visitors Bureau, Ohio Historical Society, and most recently, the City of Powell Board of Zoning Appeals. He was also very involved in many service organizations including Mason's, Shriner's, and Columbus Rotary. Joe was a devoted Buckeye football and basketball fan his entire life. He always enjoyed a round of golf with friends. Throughout his life Joe loved his family and appreciated his many friends. A private service will be held at St. Patrick's Episcopal Church later this week, where Joe previously served as Senior Warden. Arrangements by SCHOEDINGER DUBLIN. Memorial donations may be made to Honor Flight Columbus, P.O. Box 12036, Columbus, 43212-0036, or the St. Patrick Episcopal Church 7121 Muirfield Dr, Dublin, 43017. Condolences may be sent to the family at Schoedinger.com and memories maybe be shared by video at .

Joseph "Joe" Paul Jester, age 89, of Powell, Ohio, passed away peacefully on April 13, 2021. Joe was born February 6, 1932 in Columbus, Ohio to the late Joseph Jester Sr. and Elsie (Hill) Jester. He is survived by his wife of 60 years, Miriam... View Obituary & Service Information

The family of Joseph Paul Jester created this Life Tributes page to make it easy to share your memories.

Send flowers to the Jester family.