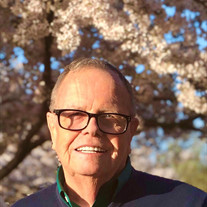 Joseph James Jackson (age 74) passed away on Wednesday, November 17, 2021. Born in Far Rockaway, New York and grew up in Westbury, New York. He graduated from Clark High School. Joe met the love of his life Su-Ann while working at Ohrbach's department store. They married in August 1970 and moved to Washington, D.C. as Joe completed his service in the US Army Old Guard. Joe went on to graduate from St. John's University, Queens, New York with a Bachelor of Arts in English. Joe and Su-Ann moved their family to St. Louis, Missouri and then landed in Worthington, Ohio where their family continued to grow. Retired from sales management, his love for his children and grandchildren was his true life's work. From his signature look of khakis, button-down shirts and baseball cap, our dad/grandpa was loyal and eager to attend the next match, meet, game, or adventure. He told the best chipmunk stories, played a mean nickel game, and loved to steal our noses. He was the greatest cheerleader and support system a young athlete could ask for. Joe is survived by his loving wife of over 51 years, Su-Ann Herman Jackson. He leaves behind his sisters Toni Valero, Angela Jackson, and Alison Ritter, his beloved children; Heather (Matt) Martin, Stephanie (Jim) Reitter, Thomas Jackson, Brent Jackson, Melissa (Erik) Lindsjö, and Courtney (Jeff) Huliba along with his adored grandchildren James (Amanda), John, Eleanor, Addison, Porter, Hunter, Graham, Wesley, Oskar, and great granddaughter Grace. He is predeceased by his son Scott Jackson, his parents and brothers. We love you Dad and Grandpa Joe. You are the best! You will forever be missed Joe Jackson. Visitation will be held at the Schoedinger Funeral Home at 6699 North High Street Worthington, Ohio, 43035. Visitation will be held 3-6 PM on Tuesday, November 23, 2021. In lieu of flowers memorial contributions may be made to DAV Charitable Service Trust (Empowering veterans to lead high-quality lives with respect and dignity) in Joseph Jackson's name. Phone: 877 426-2838 Email: [email protected] Address: 860 Dolwick Dr. Erlanger, KY 41018

The family of Joseph Jackson created this Life Tributes page to make it easy to share your memories.