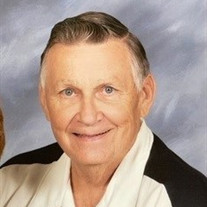 Joseph Walter Anthony Sr. went home to be with his Lord, passing away at Columbus Colony in Westerville on Sunday, November 7, 2021. He was born in Nelsonville, Ohio, January 1, 1930. He was preceded in death by his parents, Elmer and Minnie Anthony, brothers, Charlie and Richard, and his sister Helen Haignere. Joe is survived by his wife of 67 years, Marlene Weis Anthony; son, Joseph W. Anthony Jr. (Linda); daughter, Lisa Anthony (Michael Stischok); sister Patty Hicks, brother-in-law Cecil Weis; grandson Joseph W. Anthony III; granddaughters Amber Bennett (Bill) and son Lucas, Brooke Bennett (Kevin), Bridget Fawn; and great-grandchildren Jasmine and Jordan Fawn. Joe had a unique career, working first as a carpenter for the Chesapeake and Ohio Railroad, next as a soldier in the U.S. Army, serving overseas during the Korean War. After returning from the military, Joe joined Carpenter's Local 200, eventually being appointed Executive Director for the 16,000 member Columbus Building Trades Council. Joe's next career move was as Director of Labor Relations at the Columbus, Ohio officer, later being transferred to the Birmingham, Alabama office, then to the Hud Regional office in Atlanta, Georgia. The next move was back to Columbus as a Construction Analyst, an early retirement offer accepted, twenty year Hud career ends. The next career move, Joe served as a Construction Inspector for the D. E. Weatherby Architect firm, Park National Bank and Ohio Capital Corporation for Housing. It should be noted that Mr. Anthony served as a founding member of the Columbus Convention Center Board, member of the Franklin County Zoning Board, and the Central Ohio Transit Authority. Visitation will be held Wednesday, November 10, 2021 at SCHOEDINGER NORTHEAST FUNERAL HOME, 1051 E. Johnstown Rd., Gahanna, from 4pm to 7pm., with a prayer service to follow at 7pm. Mass of Christian Burial will be Thursday, November 11, at Church of the Resurrection, 6300 E. Dublin Granville Rd., New Albany, at 11am. Military Honors to follow. Private entombment in Logan, Ohio.

Joseph Walter Anthony Sr. went home to be with his Lord, passing away at Columbus Colony in Westerville on Sunday, November 7, 2021. He was born in Nelsonville, Ohio, January 1, 1930. He was preceded in death by his parents, Elmer and Minnie... View Obituary & Service Information

The family of Joseph Anthony created this Life Tributes page to make it easy to share your memories.

Joseph Walter Anthony Sr. went home to be with his Lord, passing...

Send flowers to the Anthony family.