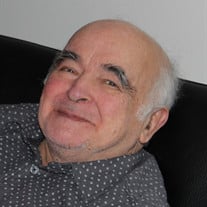 Jose Luis Rigueiro Garcia, 71, passed away September 6, 2020, in Dublin, Ohio, as a result of complications arising from COVID-19. Jose joins in heaven his parents, America and Manuel Garcia. Jose was born in a small town in the Galicia region of Spain and immigrated to the U.S. in 1958. Early in his career, he traveled the world working in the computer accounting field, picking up collectibles handcrafted by local artists from each place he visited. Later, he worked for the family business in Strongsville, Ohio, transforming patients' lives through the creation of prosthetic limbs. Jose was deeply connected to his Spanish culture through his family. He had a great love of his mother's cooking and was an avid reader of Spanish history. He was a quiet man of few words, but one of genuine kindness. Jose was intensely proud of his sons and had great affection for his grandchildren. His hobbies included tinkering on computers and cars in his younger days, solving puzzles, watching movies, and supporting the Cleveland Indians and the Ohio State Buckeyes. Jose was a cancer survivor thanks to the excellent care he received at The James and the family is forever grateful to Ohio State. He is survived by his caring older brother, Manuel (Trudy), his accomplished sons, Christopher (Anne) and Michael, his beloved grandchildren, Sophie and Will, his nephew David (Liz) and niece Keri (Everest) and his great nieces and nephews, Alex, Vivian, Eloise, Sarah, and Cody. A private interment will be held at a later date in Cleveland, Ohio. During this time of extraordinary national crisis, in lieu of flowers, the family is asking that you protect the vulnerable by wearing a mask, staying six feet apart, and donating to The Ohio State University COVID-19 Student Emergency Fund in Jose's name at https://buckeyefunder.osu.edu/project/20553/donate.

Jose Luis Rigueiro Garcia, 71, passed away September 6, 2020, in Dublin, Ohio, as a result of complications arising from COVID-19. Jose joins in heaven his parents, America and Manuel Garcia. Jose was born in a small town in the Galicia region... View Obituary & Service Information

The family of Jose Garcia created this Life Tributes page to make it easy to share your memories.

Send flowers to the Garcia family.