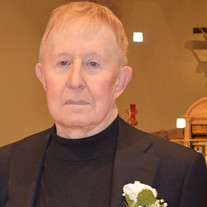 John Walter Woods M.D., 81, of Columbus, Ohio, passed away peacefully on Tuesday, January 12, 2021. John was born on July 4, 1939, in Dillonvale, Ohio, to Wilbur and Catherine (Gasda) Woods. While attending Harrisville School, he represented the region at the 1952 and 1953 National Spelling Bee in Washington, D.C., placing 12th and 6th. He would go on to become a merit scholar and the 1957 Class Valedictorian at Mt. Pleasant High School. In 1961, he graduated from Marietta College a member of Phi Beta Kappa and went on to graduate with honors from The Ohio State University College of Medicine in 1965. John proudly served as an Air Force Captain during the Vietnam War and was a Bronze Star Medal recipient. After the war, he was a highly regarded Anesthesiologist at several Columbus-area hospitals and was greatly dedicated to the care of his patients for more than 30 years until his retirement in 1996. John was a private man who lived with the utmost integrity in his work and family life and completed every task with meticulous precision. You could always find John reading a book, often reading from cover to cover in one sitting. He was also a loyal fan of the Cleveland Browns, Cleveland Indians and The Ohio State University basketball and football teams. John was also known to never meet a cat he didn't like, often took in strays, and was particularly fond of Siamese cats, who were always by his side. In the summertime, he enjoyed making homemade jams and jellies, tirelessly working by himself on this craft, from start to finish, and then generously giving most away to family and friends. He also participated annually in the North Market Amateur Jelly/Jam Contest and won first prize several times. John was preceded in death by his parents, Wilbur and Catherine. He is survived by his sister, Catherine; brother, Dr. Joseph (Diane); Barbara (Hess), his loving and devoted wife of 55 years and will be lovingly remembered by his children, Jonathan, Jason (Jill), Jeffrey (Shelly), Joseph (Erin) and Becky. He will also be fondly remembered by his grandchildren, Josephine, Justine, and Julia (Jason); Noah and Joshua (Jeffrey); and Adam and Brandon (Joseph). A Funeral Mass will be held at St. Andrew Catholic Church in Upper Arlington, OH, on Thursday, January 21, 2021, at 10 a.m. In lieu of flowers, and for his love of animals, please consider donating to your local Humane Society on behalf of John. Please visit www.schoedinger.com to share memories and condolences. Funeral arrangements entrusted to SCHOEDINGER NORTHWEST.

The family of Dr. John W. Woods created this Life Tributes page to make it easy to share your memories.

Send flowers to the Woods family.