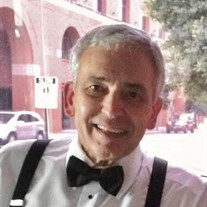 John Terakedis, Jr, age 76, passed away surrounded by his family on Wednesday, October 27, 2021. John was born in Dennison, Ohio, on March 30, 1945, to the late John and Kathryn Terakedis. He was also preceded in death by his granddaughter, Emily Rivera; father and mother-in-law, Eugene and Beulah McPeek; and sister and brother-in-law, Gloria and Gary Parrish. John grew up in Dover, Ohio. He graduated from Baldwin Wallace in 1967 where he played football, ran track, and excelled academically. In 1966, John averaged 7.5 yards per carry and went on to earn All-OAC honors, as well as receiving the Cleveland Touchdown Club's Outstanding Local College Player award that season. He was later inducted into the Alumni Athletic Association Hall of Fame. John married the love of his life, Sharon (McPeek), in 1968. They moved to Cambridge, Massachusetts, where he attended Harvard Law School. After graduating in 1970, they moved to Columbus, Ohio, where he practiced law for many years serving as a mentor to many of Columbus' tax, employee benefit, and estate planning attorneys, as well as other professionals. Upper Arlington became their permanent home where they raised their three children, Troy, Leigh Ann, and Lauren. John's values were rooted in his strong Christian faith; he grew up as a member of the Dover Lutheran Church and later joined Northwest United Methodist Church in Columbus, Ohio. John's biggest joy in life was spending time with his family. He loved watching his children play sports and coached many of their teams. He always looked forward to family vacations, especially to Sanibel, Florida. He was an extraordinarily talented athlete, gifted scholar, and distinguished lawyer, but he will be remembered most for his humility, big smile, and kind heart. John will be deeply missed by his loving wife of 53 years, Sharon Terakedis; son, J. Troy (Alicia A. Wyatt) Terakedis; daughters, Leigh Ann (John) Flanagan and Lauren (Ryan) Rivera; grandchildren, Bennett and John Ryan Rivera; step-grandchildren, Lauren and Ryan Flanagan; brother, Kirby (Marj) Terakedis; sister-in-law, Sue (Bruce) Wanosik; brother-in-law, Eugene (Becky) McPeek, Jr; and many nieces and nephews. Family will receive friends from 1:30 to 3:30 p.m. on Sunday, November 21, 2021, at SCHOEDINGER NORTHWEST, 1740 Zollinger Road, Columbus, Ohio 43221. John's family would like to extend their deepest gratitude to the staff at First Community Village, Roxbury Cottage, and Hospice Care for their support and loving care. In lieu of flowers, memorial contributions may be made to First Community Village Foundation, 1800 Riverside Drive, Columbus, OH 43212. Please visit www.schoedinger.com to share memories and condolences.

John Terakedis, Jr, age 76, passed away surrounded by his family on Wednesday, October 27, 2021. John was born in Dennison, Ohio, on March 30, 1945, to the late John and Kathryn Terakedis. He was also preceded in death by his granddaughter,... View Obituary & Service Information

The family of John Terakedis, Jr. created this Life Tributes page to make it easy to share your memories.

John Terakedis, Jr, age 76, passed away surrounded by his family...

Send flowers to the Terakedis family.