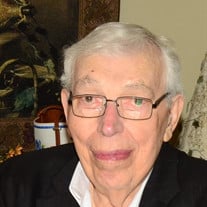 John Nicholas Proicou, 92 years old, passed away on October 24, 2020 surrounded by the love of his family. John was born June 10, 1928 in Vrontero, Macedonia, Greece. After surviving World War II as a child, he along with his mother and brother, joined his father in the United States, settling in Mansfield, OH. His love of his adopted country led him to join the United States Army. He left the Army under a hardship discharge to take care of his family when his father's health began to fail. His unfortunate circumstances did not hold him back, as he always looked at each situation as a learning experience and opportunity. After positions in manufacturing, insurance sales and a protracted bout with TB in which he was institutionalized, he attended the Gruen Watchmaking Institute. Graduating in 1956, John, worked for jewelers in Washington Court House and Columbus, including Rogers Jewelers and Kay Jewelers. He met his wife Evanthea (Eva) Burke (Voulgarakis) in 1959, and they married in 1960. Settling in Dublin Ohio, they started their lives and raised their two boys, Nicholas and George. In 1965, they purchased the jewelry store in Tremont Center, Upper Arlington, and renamed it John N. Proicou Jewelers. John and Eva worked side by side in the store, creating a following and clientele that made the business a joy for them both. John's belief was to treat every customer who walked in the door as if they were the only customer for the day, and that their needs were the only ones that mattered. It is evident that belief was true, as the store prospered for 27 years, with John closing shop in 1992. After retiring, he lovingly directed his attention to taking care of Eva who had been chronically ill with complications from rheumatoid arthritis. He also focused on being a Papou, doting equally on his grandchildren Vasilios, and Stamatia. During his care of Eva, he befriended their doctor, Barry M. Friedman, MD at The Ohio State University Medical Center. The family rightly credited Dr. Friedman with the skilled care that added 20 years to Eva's life, and in providing expert care and advice to John as well. To honor Dr. Friedman, it was suggested a fund was needed to benefit medical student education. In 1999, John provided the seed money to start the Barry M. Friedman Student Travel Award at Ohio State, providing awards to third and fourth-year medical students to attend conferences and meetings relating to General Internal Medicine or Geriatrics. Having lived the farming life in Europe as a youth, John purchased his first farm in Delaware County in 1968. Rehabbing old farmhouses with his young sons was just another way for him to strengthen his family. More opportunities for acquiring land occurred in 1972 and 1976. By this time, he and the family jumped into farming firsthand with everyone helping with the work. During those times, John, Eva and their employees kept the jewelry store running. Along the way, he helped shape the future of Delaware County by attracting attention to the S.R. 36/37 I-71 corridor by forming close relationships among neighboring landowners, which preceded the development of Bent Tree Golf Course. In 1989, John sold one farm that became part of the Double Eagle Golf Course. After Eva passed away in 2006, John fulfilled his dream of living on the farm and moved into the farmhouse he and his sons redesigned and remodeled. John was involved in many other activities: the Scottish Rite Freemason and Aladdin Shriners, the Boy Scouts as active parent and Unit Commissioner, and the parish of the Annunciation Greek Orthodox Cathedral, where he continued his life's passion working as a jeweler for the annual Greek Festival. In 2011, due to health complications, he moved into assisted living at the New Albany Gardens and Care Center. Ever outgoing, John quickly made friends of both the staff and residents and became known for making delicious Greek inspired dishes in his apartment. He was thankful and appreciative to the staff for his care. In talking to the staff, he offered encouragement to their educational aspirations or simply friendly conversations. Of all his accomplishments, John was most proud of his wonderful and loving family. John is preceded in death by his father, Nickola, his mother Ourania (Nuna), and Eva, his wife of 46 years. He is survived by his brother Christos (Barbara), his son Nicholas (fiancée Debrin), his son George (Stephanie), grandchildren Vasilios and Stamatia, numerous cousins and nephews. Considering the current public health crisis, funeral arrangements are limited to immediate family only and are being handled by Schoedinger Funeral Services and the Annunciation Greek Orthodox Cathedral. Final interment is in Dublin Cemetery. In lieu of flowers, the family requests donations in John's honor to those organizations he held most dear: The Annunciation Greek Orthodox Cathedral; The Columbus Academy Annual Fund; and the Barry M. Friedman Student Travel Award at The Ohio State University, Fund Number: 642326.

John Nicholas Proicou, 92 years old, passed away on October 24, 2020 surrounded by the love of his family. John was born June 10, 1928 in Vrontero, Macedonia, Greece. After surviving World War II as a child, he along with his mother and brother,... View Obituary & Service Information

The family of John Proicou created this Life Tributes page to make it easy to share your memories.

Send flowers to the Proicou family.